In Part One of this story, I described the late 2017 addition of Bailey the Border collie to my multi-dog household. Although Bailey fit into my active lifestyle quite well in many ways, she challenged the pack hierarchy. In particular, she hassled Leah, my current alpha female.

At one point fairly early after she joined me, I took photos of her to facilitate rehoming her. However, I couldn’t do it. Instead, I put her on Prozac, hoping to diminish or extinguish the problem behavior. Neither Alan nor I were convinced that the Prozac was working…

Early last August, we were in Estes Park with all 5 dogs. A couple passed by and were immediately drawn to Bailey. Apparently, they had lost their family dog a couple of weeks prior, and Bailey resembled that dog. As we visited, I suddenly had this overwhelming urge to talk to them about taking Bailey! It was a “God prompt” in my opinion. Regardless of the origin of the idea, I internally refused. No way I was going to talk to perfect strangers about my dog. I buried the thought. 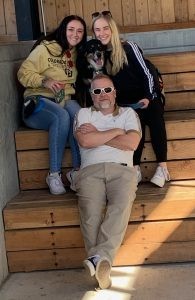 A few minutes later, they stood up from where they were squatting next to Bailey and prepared to leave. Again, this overwhelming urge to tell them about Bailey arose in my mind. You will talk to them before they leave… I blurted out, “She might need a new home!” Alan looked at me in total shock. We hadn’t talked about it in months.

They seemed interested. I wasn’t even sure I was interested. I gave Monique, the wife, my phone number (and didn’t take hers.) If they were interested, they would reach out to me. Five days later, she did. I called my daughter Laura and described what had transpired. It was very hard for Laura to think about this possibility. I assured Laura that nothing would happen immediately. Furthermore, no decision would be made unless everyone was in agreement. 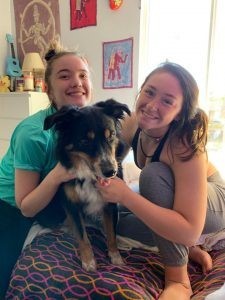 Alan and I returned to Kansas. I decided to wean Bailey off the Prozac to see if it was making any difference at all. To my surprise, it was. The problematic behavior increased as the Prozac levels decreased. That knowledge was troubling for me. In this post, I described a previous experience I had with two quarreling family dogs. What I didn’t say in that post was that Emma was on Prozac. Emma had attacked Leah a couple of times previous to that fateful day. Sadly, her Prozac schedule had been disrupted due to a recent trip where her medication had been forgotten. Although the attack occurred several days after she resumed her medication, her blood levels had fluctuated.

As a result of that experience, I was unwilling to try and maintain household harmony using drugs alone. Clearly, It didn’t work well for me in the past. Laura and I had additional conversations about what to do. Fortunately, Bailey’s potential new family was flexible, understanding and supportive. 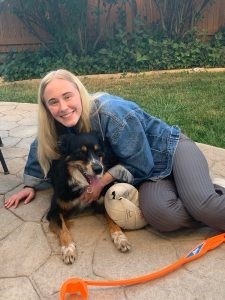 Ultimately, we made the decision to place Bailey in a new home. Her new family consisted of two parents and three teenage daughters, all of whom were very excited about getting her. Before she arrived, they had acquired toys, tags, bedding and collar! Happily, there are no other dogs in the household, only cats. The family lives a significant distance from my home. Alan and I met them on the way to our New Mexico ride at a mutually agreeable location. After the ride, we traveled to their home to see how Bailey was adjusting.

Truly, she was a very happy dog. The cats were not interested in being friends with her, but that was her only issue! She had five adults doting on her. As Alan and I prepared to leave the house, she did not follow us to the door. Understandably, that surprised us. By the same token, it made us very happy. Clearly, she felt at home. My “God prompt” totally resolved a problematic issue in the most amazing way.

At the present time, I am horse camping in Missouri. It has been quite a week. Don’t miss next week’s blog, as I 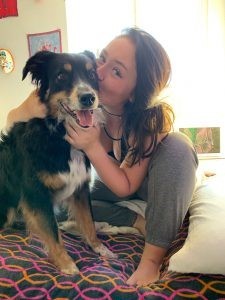 will discuss concussions (mine), lacerations (Finn’s) and temper tantrums (Finn’s)!