Last week, I blogged about my rather challenging week with my two horses. Note I said two horses, not a herd of twenty. I guess Murphy’s Law states they’d both have major issues in the same week!

My new little mare, Sadie, greeted me last week with a lovely gash in her head. It was more than a bit shocking to realize I was looking into her frontal sinus! The most likely culprit was big brother Kadeen… the forehead gash looks about right for the end of a shod rear foot. There is nothing else I can think of that would break bone.

Besides mangling Sadie, Kadeen’s contribution to my stress came in the form of repeated corneal ulcers. There are few things more fun than treating horse eyes multiple times a day…

Kadeen has also had an intermittent, dry cough. It is infrequent. I am virtually certain the cough and his itchy eyes (and therefore the corneal ulcers) are related.

I hauled him to the veterinary ophthalmologist this past week. His ulcers had healed, so I guess I did a good job of treating them. The verdict is a chronic inflammatory process going on in both eyes, most likely Herpes virus. His immune system is ramped up as well.

I had been giving him oral steroids (on the advice of my equine vet friend.) That treatment calmed his immune system down in general, which helps his eyes. But that can’t be a long term solution. In fact, he’s off steroids now. I will only use them when he has a coughing flare-up. He never coughs while just hanging out in the dry lot. It is only when we ride.

Currently, his eyes are clear and we are (more or less) getting a few drops of medication in his eyes twice a day. I have ointment ordered instead of liquid. More expensive, but should be much easier!

Lastly, I have realized that feeding a round bale is aggravating Kadeen’s allergies. He did much better this summer on pasture. Now that he is sticking his head inside a hay hut, he’s getting much more dust and allergen exposure. We are going to have to change that…

Update on Sadie’s Hole in Her Skull

Sadie, I am happy to report, is doing great. I have watched her very carefully for any sign of infection. She gets “snot exams” on a regular basis! I took her temperature for the first few days. She gets her antibiotics in her feed, so her consumption is closely monitored. Her incision looks amazing, and I spray it daily with a topical solution that promotes healing. She’s not crazy about that process…

It is quite unfortunate that this nasty experience for her happened before she really even knew us. She’s very sweet and, for the most part, quite trusting. But she has a hole in her skull and understandably, she’s a bit wary of anyone messing with it! Truth be known, Kadeen trusts me and his level of cooperation for getting his eyes treated leaves a little to be desired. Sometimes I just have to resort to, “You are doing this because I say you are!” 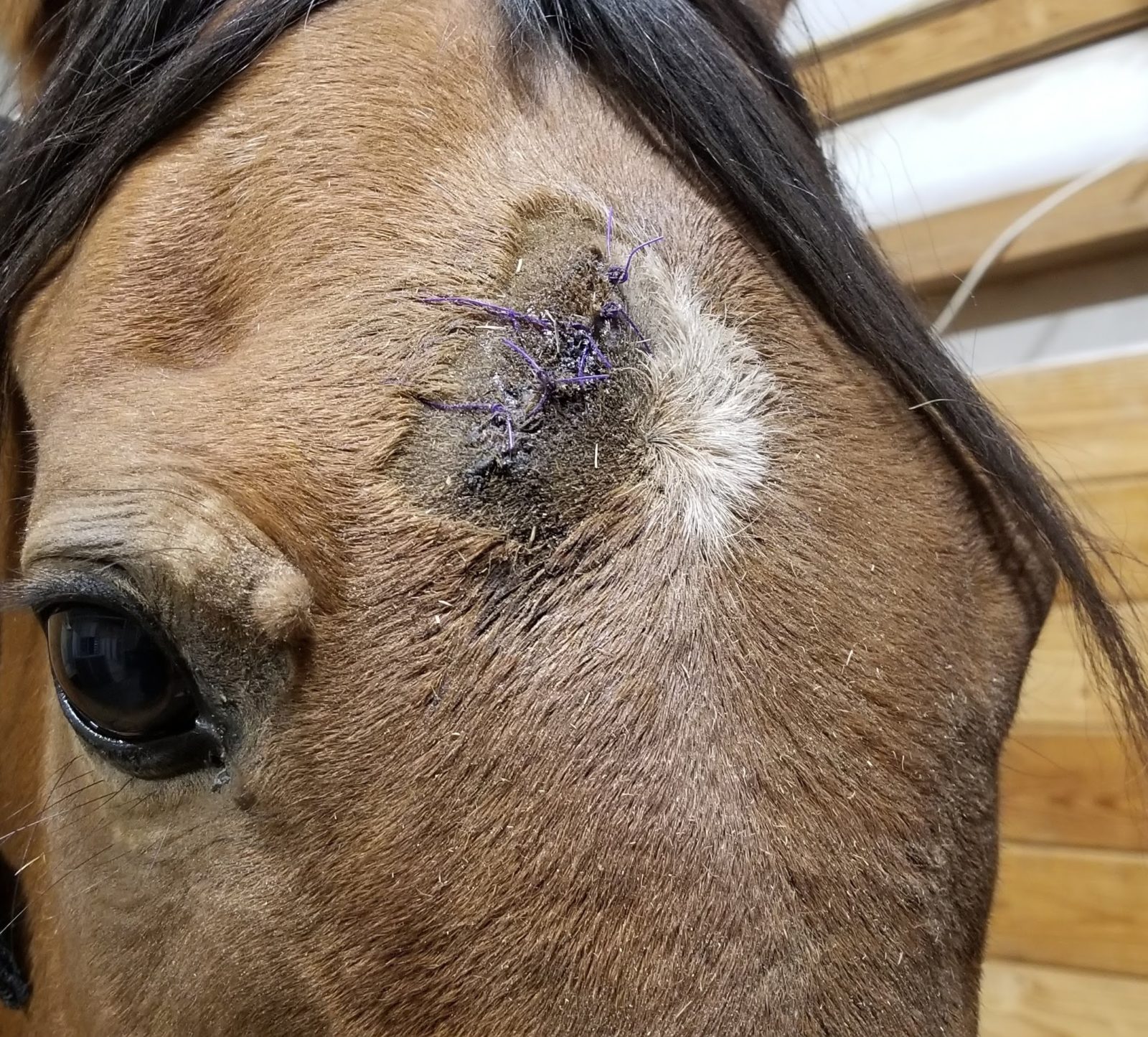 Sadie is sporting a huge fly mask with a wire support that hopefully makes it harder for her to rub her itchy head. Too bad her beautiful face is hidden. All in all, though, I am totally thrilled that she is doing as well as she is!