Once again, fires are causing mass destruction in California. Those of us not affected by these raging infernos are not aware of all of the ramifications of this disaster. An article in the Wall Street Journal really opened my eyes to the impact these fires have on Californians.

I had heard about the blackouts imposed by the power companies. High winds can knock down power lines and create 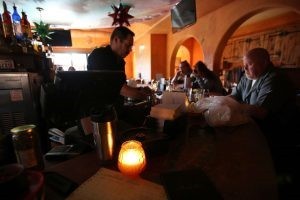 additional “spark” fires. The main electric company in California has been implicated in a couple of fires. However, what I didn’t consider was the impact that has on restaurants, gas stations, and other community resources. Schools have closed due to smokey conditions. Gas lines are long and grocery stores are closed. Think about all of the ways we depend on electricity? Additionally, I hadn’t considered the impact two years of major loss has had on the insurance industry. Homeowners who are lucky enough to still have a home are paying rapidly rising premiums.

What about a resident who is dependent on an oxygen tank? The Wall Street Journal story begins with this statement:

On the fourth morning without power, Carolyn Summers lay as still as possible in bed, trying to delay the moment when she ran out of oxygen.

Recently, a news story featured a “hero horse”. This grandmother mare went back into the smoke to lead her young granddaughter and another horse to safety. The video went viral! There are many different sources to watch this video. One news commentator initially assumed the mare was returning to the barn where she felt more comfortable. This New York Times article from two years ago talks about desperate owners trying to get their horses out of burning barns. The horses often resisted because they were so afraid. Honestly, it is difficult to imagine the fear and chaos both people and horses would experience in the face of raging wildfires. This is the longest and most unedited version of the Hero Horse video I could find.

This is a sobering article about why California is experiencing so many wildfires. Apparently, California has 78 more “fire days” per year than it experienced fifty years ago. The expectation is that each subsequent year will exceed the previous one… The amount of money spent to fight fires in the past decade is approaching 5 billion dollars. What are the variables at play here? The climate is changing, and fires occur as late as December. Homes are built in the wildlands. Previously forested areas now contain subdivisions. The drought in California is epic. Warmer weather, lack of water, disease, and pests have damaged and killed many trees. Of course, dead trees make great kindling. 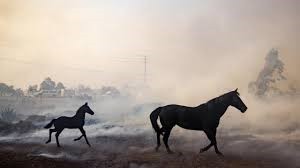 Many Californians are rethinking their decision to live there. Then again, others would never leave. Unquestionably, living in California has many challenges. It might be a wonderful place to own horses and ride often. But clearly, in some areas, horse owners must have a plan for dealing with a raging fire.

I wrote about last year’s fires in two posts, The Crisis in California and More on the California Wildfires. Sadly, the media coverage this year looks remarkably similar to the coverage a year ago.

On a personal note, I removed Sadie’s sutures and her wound looks great. She really likes for us to scratch it for her as it itches! No sign of infection or problems. (Read my blogs about Sadie’s hole in her head here and here.)