I have written many posts about my animals and friends and the experiences of this past year. I thought perhaps I would provide an update to some of those stories…

In April, I wrote about the addition of Kara the Border collie to my household. She joined my family when she was 8 weeks old. She’s now a month away from her first birthday. She had huge paws to fill in the form of her predecessor Reilly. Still, I am not at all expecting her to be a clone of Reilly. That’s a good thing, as she is very different.

Reilly never, ever met a stranger, no matter what age they were. Kara is much less confident and assertive when it comes to people. She doesn’t spend much time around kids, so little people can throw her for a loop. My granddaughters were here for the holidays. Kara struggled, but she was much improved over the last time.

However, when it comes to animals, she has no doubt she’s the top dog! She tries to push her adult siblings around whenever possible, sometimes successfully and sometimes not…  She thinks nothing of trying to herd or direct the full-grown Pointer we encounter on our daily walks. Her propensity to herd is extremely strong, and there is no question she will need regular exercise. Invariably, she starts in on me about 30 minutes after breakfast and is relentless until we get outside. Sometimes I resort to running them on the ATV to get more mileage in a shorter time!

Kara is super sweet. She’s also cuddly, something that Reilly was not. If Reilly had my attention, we needed to have a ball in play. Additionally, Kara uses her front legs like a monkey! She wraps them around me, bats at things, and has them in action all the time. Lastly, she has one ear that has struggled to stand as readily as the other. Although she can easily hold it erect, she usually has a “one up, one halfway up” appearance! Super cute! She’s a ton of fun. 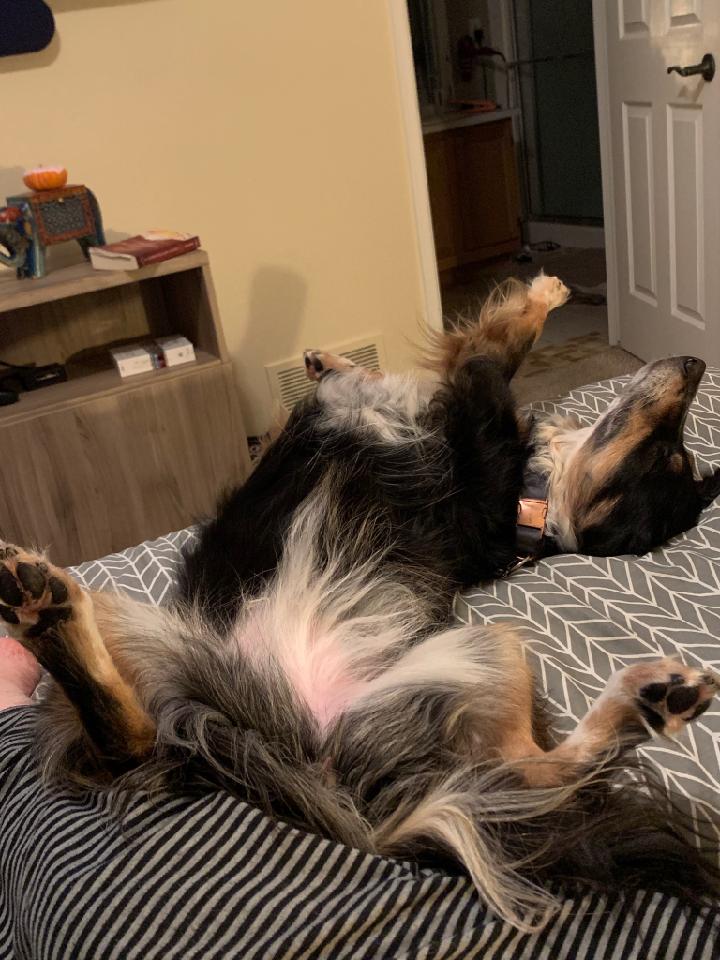 I wrote about Bailey in October. She found a new family and she is one happy dog! She’s in a one-dog household with 5 adults pampering her. I still think about the circumstances under which I found her forever family, but clearly, it was a good decision. 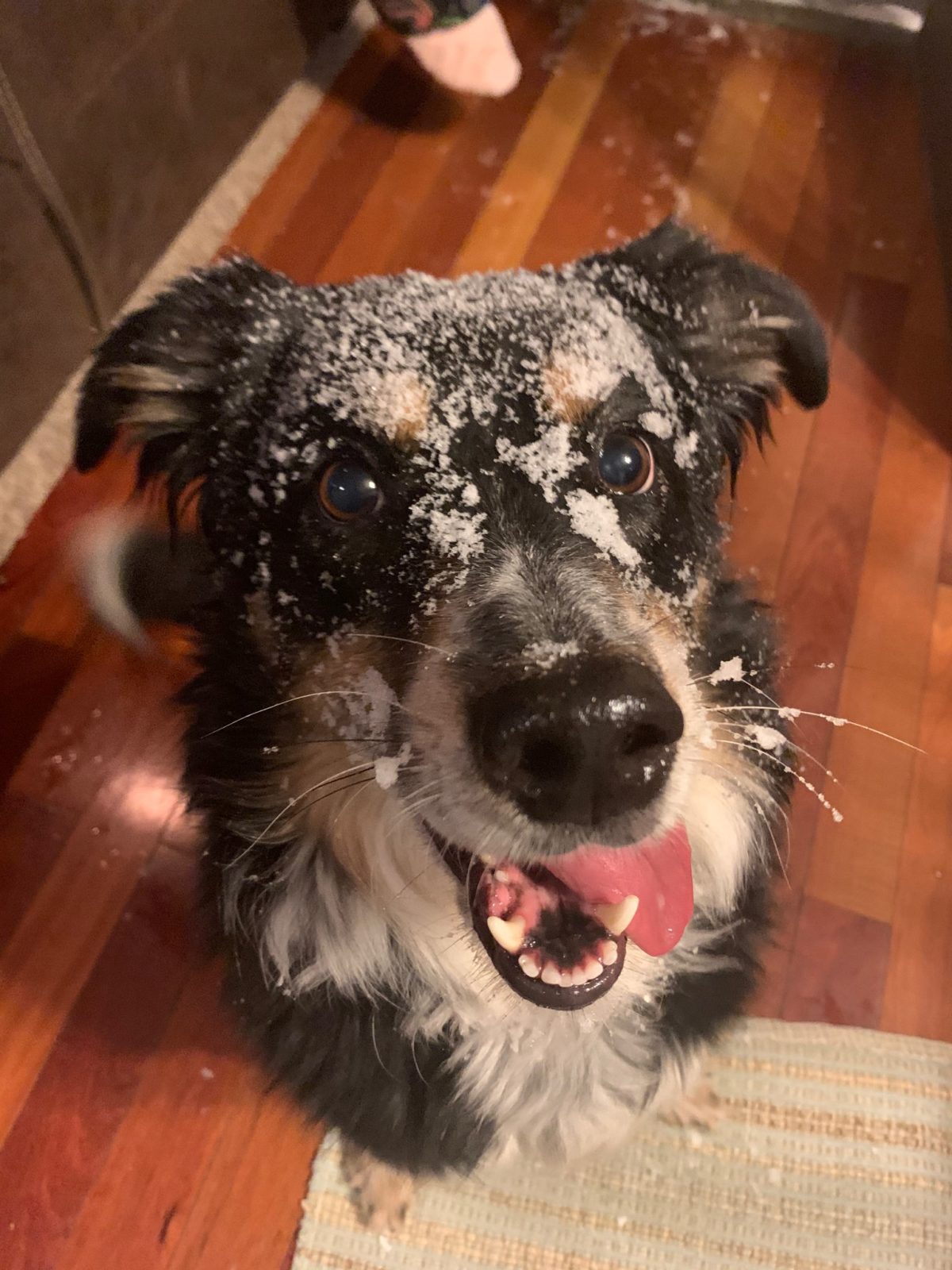 I wrote several blogs this year about Finn, my half-Arabian, half QH/Thoroughbred gelding. Finn and I spent two summers on the trail. I tried to convince him the great outdoors was not such a scary place, but I finally admitted defeat. Finn spent the month of November getting a performance horse tune-up at a local show barn. He’s still for sale at a great price.

I had a fair amount of interest in him before the holidays, so I hope he finds a great show home soon. He never gave the trainer a bit of trouble. He really has a sweet disposition and wants to be your best friend… just don’t make him lead on a trail!

Sadie With a Hole in Her Head 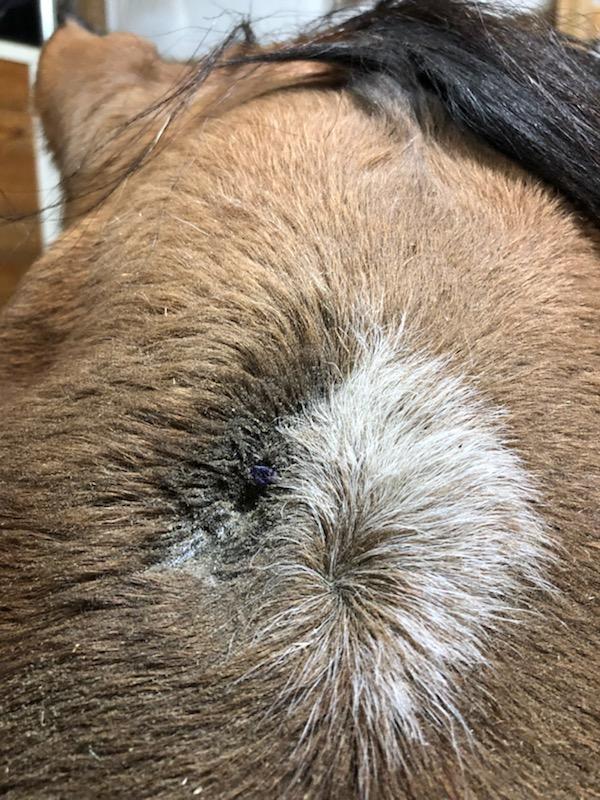 Before we managed to find a new home for Finn, we purchased Sadie. Sadie loves the trail and she easily keeps up with Kadeen. However, we had only had her for a week when Kadeen kicked her in the head. She turned to me at feeding time one morning, sporting a finger width and length gash in her head. I found myself looking into her frontal sinus! We stitched her up and crossed our fingers. It is about 6 weeks into her healing and she’s doing okay… A small section of the sutures came apart, but it is healing well by granulating in. Most concerning is the caved-in section that is quite evident. My equine vet friend assures me it will improve over time. She never got an infection nor missed a meal. She has been wearing a wired fly mask since the accident, as it helps keep her from rubbing the vulnerable area. It is unfortunate that we can’t see her beautiful face!

Sandy and Her Fractured Pelvis

In July, I wrote about my friend Sandy. Sandy had an OTT Thoroughbred fall on top of her, rearranging her pelvis. She spent quite a bit of time in the hospital, and then a long convalescence with physical therapy. I am happy to report that Sandy healed well and, as of the first of December, is back in the saddle! She now encourages the use of ID MyHorse Emergency Identification Tags. She says her husband quips that being married to her is “like being married to a police officer!” Always on edge, wondering if he will get “the call”. He’s gotten “the call” twice already. Give your family peace of mind and protect you and your horse. Tags are on sale New Year’s Day! 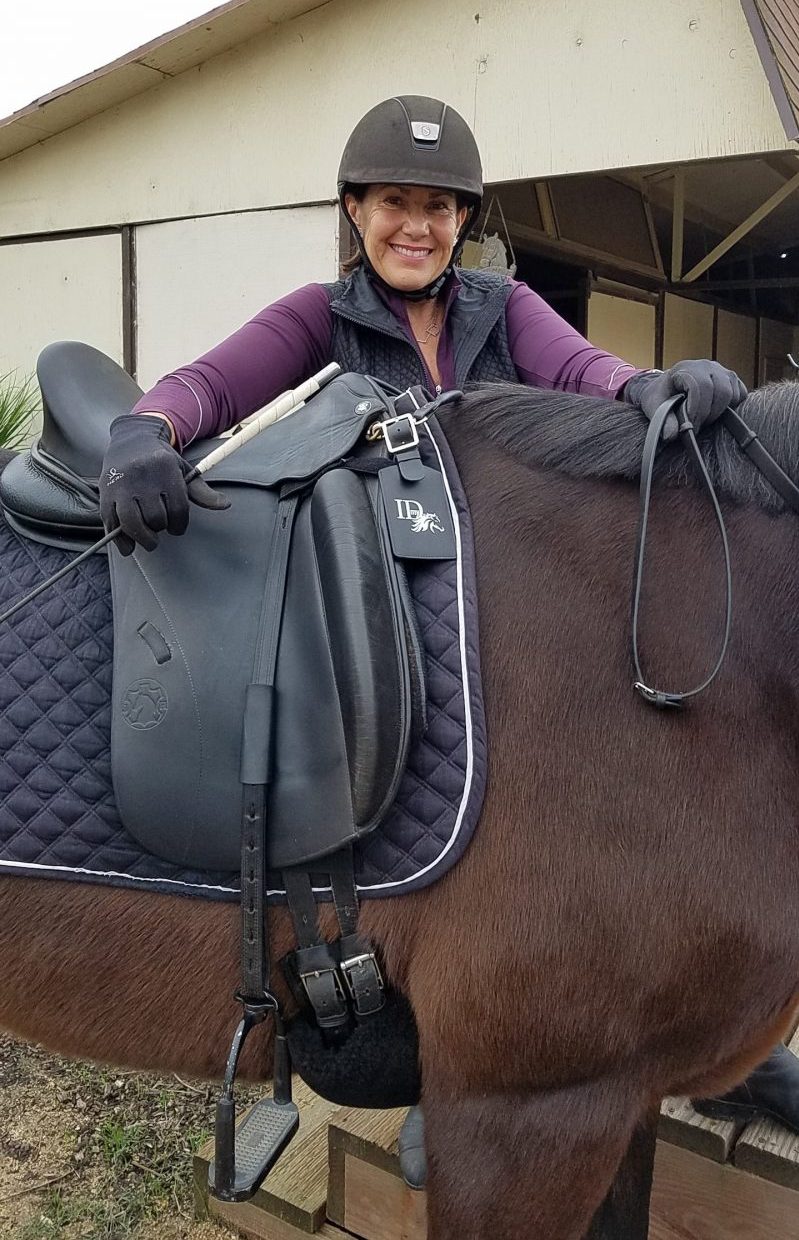 I hope you and yours have a wonderful and safe 2020!