Have you ever seen the Facebook post from the “Save the Possums” group, describing how valuable opossums can be? For instance, the article touts the fact that opossums eat many insects. Would you like fewer ticks around your barn? Feed an opossum! The trouble is, you may already be feeding your barn guest if you leave cat food out for your legitimate residents. Even more ominously, you might be increasing your horses’ risk of contracting Equine Protozoal Myeloencephalitis, or EPM.

I currently live in a barndominium, where my house and barn share the same roof. My horses’ shelter is an overhang off the back of the barn. Therefore, I don’t have to rely upon my stalls for their shelter. In the past, the stall doors had to remain open. That scenario allowed wildlife access to my barn. More than once, I found “possum poop” on my square hay bales. Additionally, I went through a lot of cat food above and beyond what my felines ate.

I spent the summers of 2013 and 2014 living in Estes Park, Colorado. I had two horses and a mini at the time. Kadeen, my grey Arabian, and Java, a Quarter horse, were my two riding buddies. One day, at the end of a “normal” mountain ride, Java simply collapsed with my friend on board. We were about a mile from the trailer, but thankfully, in an area where I could bring the trailer to Java. We met up with the local equine vet. A massive series of tests ensued, with no certain diagnosis. I hauled Java back to Kansas, but not before installing a camera in the trailer. I had no idea if he would be able to handle the trip.

Ultimately, he was diagnosed with EPM, although that is a difficult diagnosis to confirm. In a subsequent blog, I will describe Java’s outcome, but first, what is EPM?

The cause of EPM 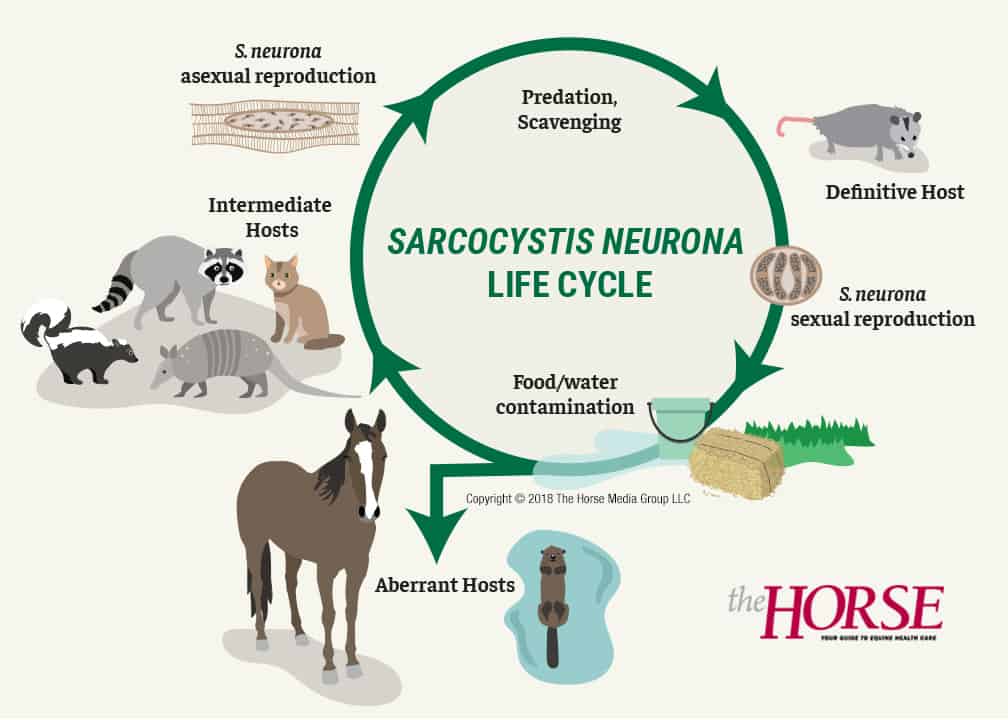 A protozoan parasite causes EPM. There are two variations of the protozoan, although one is more often implicated in the disease. This parasite falls into the same class as Toxoplasmosis, the protozoa that can be shed by cats. Toxoplasmosis can create serious issues in pregnant women. Thus, doctors often warn moms-to-be to avoid cleaning the kitty litter box.

The infective stage of the parasite is called a sporocyst. It is shed in the opossum’s feces. But here’s the thing… some horses can ingest the sporocyst and develop an adequate immune response before the organism gets the upper hand. Those horses appear to be able to resist the infection. Alternatively, other horses, especially those under additional stress, cannot keep the organism in check. These horses will eventually develop symptoms, although it can sometimes be months or years before signs develop.

The sporocysts migrate into the nervous system where they wreak their havoc. Symptoms are related to where the sporocysts land. Typically, symptoms are asymmetrical, meaning the signs of disease are more prominent on one side of the horse. Unfortunately, EPM is often called “The Great Impostor” because symptoms can mimic many other diseases.

The brain, brainstem, and spinal cord comprise the nervous system. Spinal cord involvement might create a horse lame in one leg. Brain and brainstem involvement looks more frightening and might result in a horse that is wobbly or unable to stand. A horse might have difficulty swallowing or show evidence of facial paralysis. Due to the lack of nerve function, muscle atrophy occurs, resulting in significantly decreased muscle mass. The muscles of the topline and the large muscles of the hindquarters are most often affected. Additionally, sensory loss might occur. This video shows a horse with ataxia, which means loss of total control of body movements.

The symptoms vary widely and are dependent on several factors. These include the location of the protozoan, the number of organisms involved, the time between infection and treatment, and the overall stress level of the horse.

In next week’s blog, I will describe treatment options. Furthermore, I will tell you about a DVM/Ph.D. researcher who has her own theories about EPM. It was that vet that I turned to when Java became ill. I opted to follow her approach, and my horse got better. I did receive grief from my colleagues about not using the (not so) tried-and-true FDA approved approach. But more on that later…