In Part One of this series, I discussed the fact that opossums carry the protozoa Sarcocystis neurona that is the primary causative agent of Equine protozoal myeloencephalitis. Additionally, I briefly described the lifecycle of the parasite and discussed the symptoms of Sarcocystosis or infection with Sarcocystis. Frustrated horse owners responded to the blog, leaving numerous comments and personal stories. Clearly, this disease has resulted in the euthanasia or retirement of many talented and beloved horses.

My personal experience involved my horse Java. He is the bay Quarter horse on the right of the featured photo. My Arabian Kadeen is on the left. Java collapsed in the summer of 2014. I worked alongside my equine vet friend to determine Java’s diagnosis. We ran numerous tests. However, EPM is often a “rule-out” diagnosis, meaning every other reasonable possibility has been eliminated. The only definitive way to confirm EPM is by a post mortem exam on the horse. It was extremely frustrating and confusing to me, and I have a veterinary degree! I consulted numerous veterinarians and it seemed as if everyone had a different approach. Furthermore, the FDA-approved treatment was expensive and uncertain.

How Should I Treat Java? 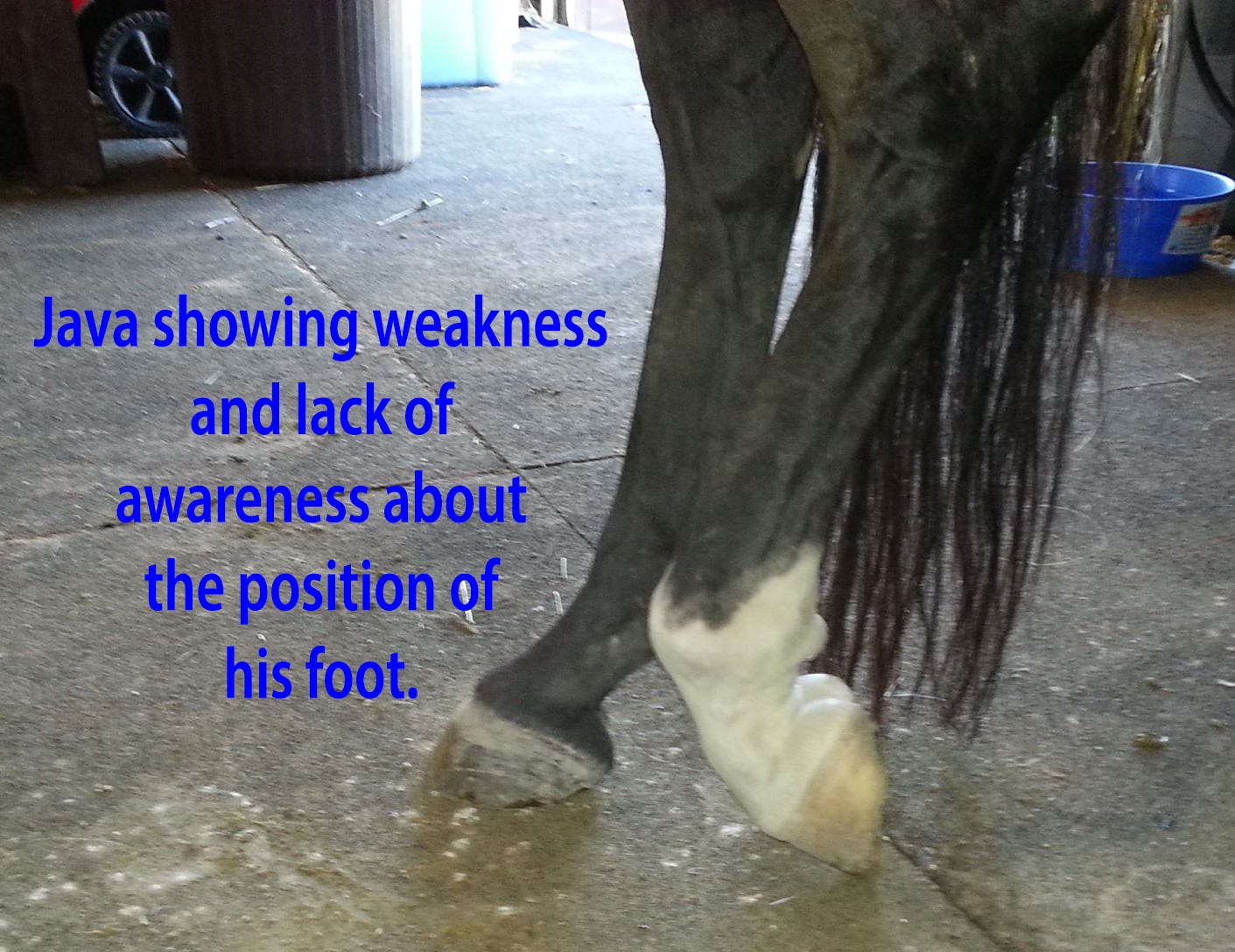 As part of my research, I stumbled upon Dr. Siobhan Ellison. She is a DVM/Ph.D. who has focused her research on EPM. She has an incredible amount of information available on her website. We had numerous conversations about this horrible disease and what treatment options I might have. Notably, Dr. Ellison had her own theories about what was creating Java’s symptoms and what could or should be done to treat the disease. If I followed her protocol, I would be going against the recommendations of my own profession. Nevertheless, her rationale and knowledge and conviction about her beliefs convinced me to try her approach. Remember, this was 2014, over 5 years ago.

Java recovered completely. However, he needed rehabilitation in the form of regular, slowly increasing periods of exercise. At the same time, I was initiating a divorce. Java was my “guest horse”. As a result, he was infrequently ridden. I knew I would never be able to commit to a consistent and adaptive rehabilitation program. Frankly, given the humongous disruption occurring in my life, I wasn’t certain where my animals and I would even live!

Faced with difficult choices, I donated Java to a therapeutic riding school. I am thrilled to say that he is still there 5 years later, and still very healthy. He is one of their favorite horses.

I reached out to Dr. Ellison and told her I was blogging about EPM. I wanted other confused horse owners to have access to her research and expertise. I have her permission to quote her responses in their entirety. In one of her first email responses, she had this to say:

The main thing owners need to realize is that there are early warning signs of neurological disease.  Three percent of horses have reactions to vaccines that show up as tripping or weakness, and can be interpreted as “’EPM”.

If there is one thing that owners/veterinarians should understand, it is that sarcocystosis (infection with Sarcocystis) is very, very common and results in (the horse producing) antibodies.  Antibodies are good and indicate protective immunity.  EPM is the presence of parasitic protozoa (Sarcocystis neurona or Neospora) in the central nervous system and this is very, very rare.  There is no diagnostic test for EPM. The neural tissue can be examined on post mortem but often parasites are not seen. However, inflammatory cells are detected.  The inflammation is enough to cause the signs without parasites present.

Here is the most critical take-away from this information… It is inflammation that creates the symptoms of EPM. Dr. Ellison goes on to say:

Our research shows the inflammation associated with sarcocystosis can lead to mild neurological disease.  Some horses can’t turn off the inflammatory cycle (same syndrome that is present in Lyme disease-check out what the CDC has to say on chronic Lyme in people!)  Chronic inflammation leads to more severe autoimmune disease.  We support testing and recognition of the inflammatory responses and identifying horses that can be treated to normalize the immune system.

Dr. Ellison’s lab, Pathogenes, tests for 3 different variations (called serotypes) of S. neurona. A horse that tests negative has not been exposed to the protozoan parasite at all. They also have specific tests to look for autoimmune reactions that lead to chronic inflammation that targets the nervous system. The latter test is called CRP which stands for C-Reactive Protein. CRP is a nonspecific marker of inflammation. Different types of “insult” to the body result in different types of cells responding to that insult. Therefore, an elevated CRP doesn’t tell you what type of cell is responding, only that there is inflammation going on. 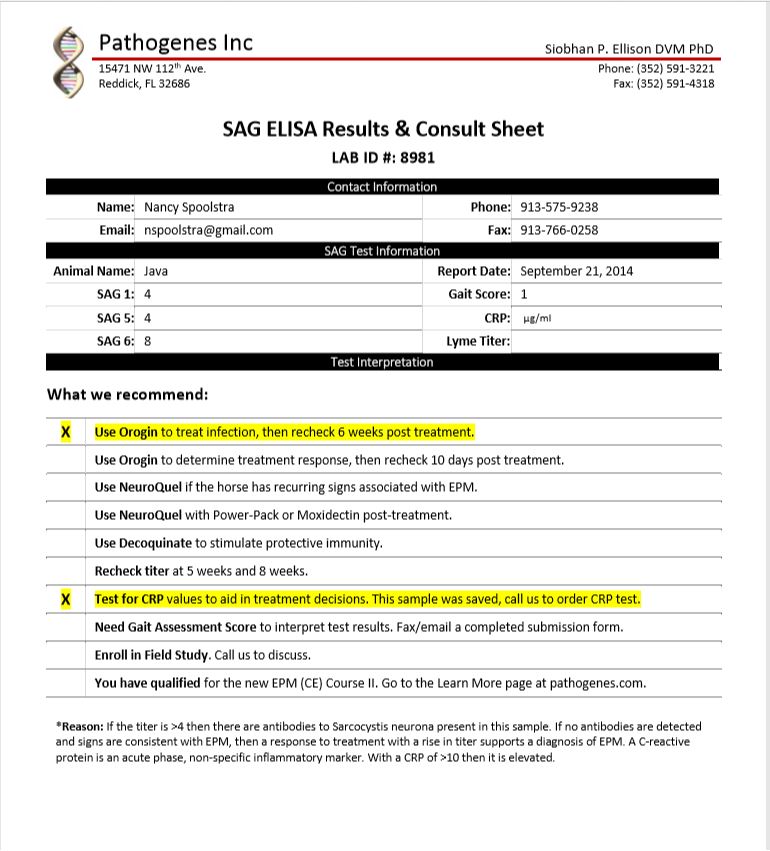 I still have my paperwork and email communications with Dr. Ellison dating back to September 2014. Java’s test results showed antibody responses to the three types of Sarcocystis. His numbers were 4, 4, and 8 in September. In January, they were 4, 4, and 2. What does that mean? It tells me he was exposed to all three serotypes. Most importantly, it tells me he had more antibodies to SAG 6 in September than he had in January. Therefore, SAG 6 was the serotype that created the inflammation that caused his symptoms.

Additionally, his CRP was 10, and Dr. Ellison’s lab considered anything over 9 to be an inflammatory response. Interestingly enough, her research has shown that some horses run a “normal” high CRP and she wondered if intestinal parasites were creating a chronic inflammation that elevated the CRP? She wrote a blog about that in the spring of 2018 and prepared to launch a research project to test that theory. I don’t know what she learned, if anything.

Dr. Ellison has an e-book available on Amazon. It is called Polyneuritis Equi Explained. “Poly” means “many”, “neuritis” means “inflammation of the nerves.” So, “polyneuritis” is “inflammation of many nerves.”  Dr. Ellison believes polyneuritis is mislabeled as EPM. Dr. Ellison says, “Because PNE is rare, it is overlooked as a diagnosis or confused with Equine Protozoal Myeloencephalitis (EPM)” She wrote that book in 2018. She also has an e-book written in 2017 called 2017 Researching EPM.

I have so much more to share about this disease. It is confusing and technical, and I will endeavor to decipher it over the course of additional blog posts. Next week’s blog will discuss Polyneuritis equi in more detail.

Let me leave you with another quote from Dr. Ellison:

Most vets think disease is infection and if there is little response to treatment, they treat again. The pathogenesis of disease is an inflammatory response that vets aren’t familiar with.