EPM is a confusing and (apparently) prevalent disease affecting horses. This is the third installment of this series. Part One discusses infection with Sarcocystis neurona, the main protozoan implicated in EPM. Next, Part Two provides an overview of what causes the symptoms of EPM. This post will provide some critical bullet points to understand and remember when dealing with a neurologically impaired horse.

This first point is extremely important. For a horse to actually receive a true diagnosis of Equine Protozoal Myeloencephalitis or EPM, parasites must be found in brain tissue on a necropsy done after the horse dies. Alternatively, a brain tissue culture must yield the organism. These are the only definitive ways to diagnose EPM. To be sure, there are tests that can indicate exposure to S. neurona. There are tests that can document inflammation. Serial testing can indicate if antibody production is increasing or decreasing, or demonstrate changes in the inflammatory process. But simply detecting antibodies in the horse, either in blood or cerebral spinal fluid, does NOT a diagnosis of EPM make!

Seventy-eight percent of normal horses have antibodies to S. neurona. That means they have been exposed and infected with the parasite.

Both strains can be present in a horse at the same time. Dr. Ellison theorized that S. fayeri might provide some protection against developing EPM due to S. neurona.

Infection with S. neurona or S. fayeri is called Sarcocystosis.

Sarcosystosis with either S. neurona or S. fayeri and polyneuritis are all associated with EPM.

There are several other neurological diseases in horses that are very rare. But not everything is EPM!

Cornell University reports that 33% of the cases referred to the teaching hospital for a neurological condition were diagnosed as EPM by the referring veterinarian. (Remember, the actual incidence is 1%)

Understand that “EPM” is Actually a SYNDROME in Most Cases

First, infection with a protozoan parasite causes inflammation. Second, inflammation creates problems with normal nerve function. Third, abnormal nerve function creates the clinical signs of a horse in trouble. It depends on where the protozoa land as to what nerves will be affected. Owners might see behavioral changes, muscle wasting, wobbly gait, stumbling or lameness.

A side note here… I realized an interesting phenomenon early on after graduating from veterinary school. The “vet” in me would notice some problem with one of my animals, but the “owner” in me wasn’t so observant. It was the weirdest thing… There would typically be a few hours lag between the time when something that I was seeing was raising a (subconscious) red flag, and the time when I would realize a red flag was waving in my head! Eventually, I came to recognize this phenomenon and pay more attention to the nagging feeling that I needed to look closely at my horse (or dog or cat.) 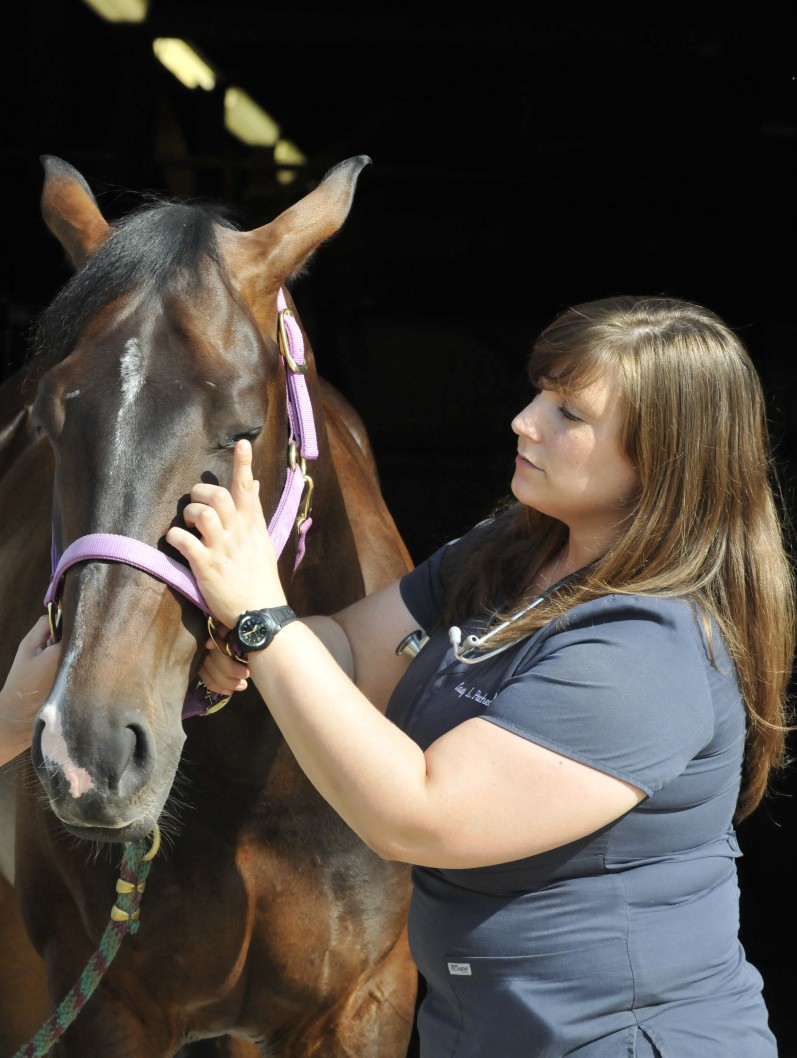 There are many subtle signs that might clue an owner to a new or recent infection. For instance, inflammation of the cranial nerves might cause a horse to drool or drop grain. Of course, what is the first conclusion we would draw? Our horse needs his teeth floated! Maybe not! Cranial nerves innervate the eyes. Blinking abnormalities, dry eyes or ulcers, or droopy lids might be another early warning sign. These signs of inflammation in the cranial nerves might come and go quickly.

Subtle signs of lameness, personality change, or weight loss might easily be overlooked. In my case, I didn’t pick up on something going on with Java, but that doesn’t mean that there weren’t clues…

If something appears to be amiss, pay attention to your gut feeling!

The next installment will provide more detailed information about Polyneuritis equi. After that, I will touch on testing and treatment options. As in previous posts of this series, I encourage you to check out Dr. Ellison’s website.