Last week’s blog provided a rundown of Day One of my fiance’s and my hunt for the perfect place to land in Arizona next winter. I mentioned that we excluded King’s Stable in Apache Junction from our list of potential landing spots. Perhaps I should rephrase that to state that King’s Stable excluded us because we travel with four dogs. A reader commented that she stays at King’s Ranch and there were many campers there with more than 2 dogs. Perhaps this is a new rule?

I also mentioned Ride Out Ranch, a new facility opening up in the Florence area. I received an email this week announcing an Open House on Saturday, March 7th from 10 AM to 4 PM. Free drinks and tacos!

Day Two found us waking up in a hotel in Tuscon. I must say, we liked Tuscon better than Phoenix. The city is clean and attractive, with many of our favorite commercial and eating establishments. We ate at Sweet Tomatoes Restaurant which has closed in the Kansas City area. I am looking forward to getting my salad fix when we winter in Arizona!

Our first stop on Day Two was Wickenburg, to visit Horspitality RV Park. I had put out feelers on several large Facebook groups, looking for suggestions and feedback on places to see in Arizona. In the interest of full disclosure, I received a significant number of “warnings” about the management at this camp. I will provide a straight-up description of my dealings with the owners of this facility… 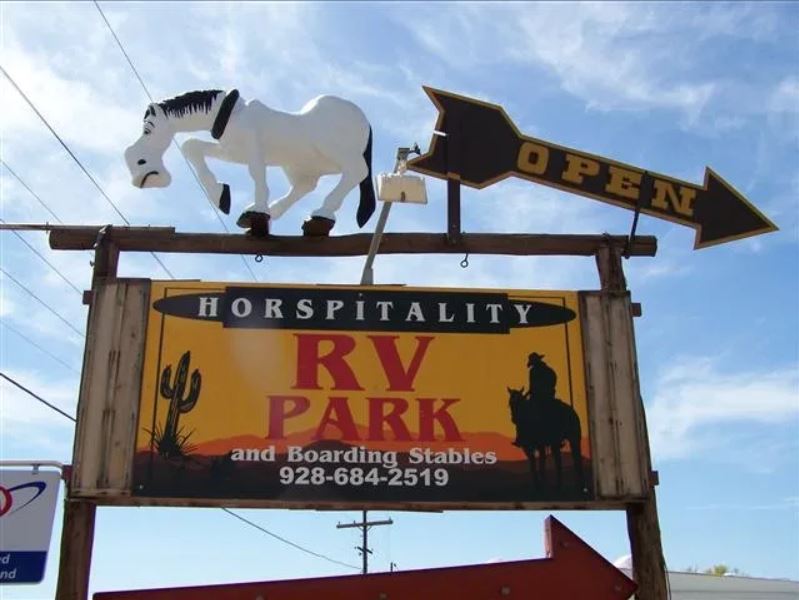 I had three phone calls with Janice prior to actually visiting the facility. The first conversation was laid-back and cordial. The second was abrupt and somewhat unsettling. I do believe Janice runs a “tight ship” and that, perhaps, is an issue for some. In my opinion, if rules make sense and they are fairly enforced, it is a good thing for all involved. We attempted to communicate our arrival time but received a curt email response. However, after that, I received a call from Janice. She was apparently having trouble reaching me. We weren’t sure what to expect when we arrived.

I had read somewhere prior to our arrival that the life-sized cutout of Donald Trump displayed in the office created issues for some of their campers. In this charged political climate, people in the service industry are probably wise to somewhat mute their political views in the interest of not generating conflict. Janice is clearly comfortable with the concept that her opinions must be shared, as she greeted us wearing a Trump sweatshirt, Trump hat, and Trump earrings. Again, regardless of where your views lean, that was pretty overt. However, it’s her place, so her rules.

We found her pleasant enough. The facility is clean, although large and densely populated. Horspitality states that “horse pens are located in a flood plain”. We arrived on a rainy day, so we were able to assess that. Some standing water was evident, but it wasn’t too bad. We really didn’t see any issues with the place, other than it was much larger than we preferred. She has nearly 100 sites, of which apparently about 60 are horse people. I shared with her my ID-MyHorse Emergency Identification Tags and she was enthused about the idea. She did take business cards to share with all 60 of her campers and I appreciated that very much. In a large facility, it is not only beneficial to the horse and rider to be identified, but it helps proprietors take action if a riderless horse returns to camp!

Aguila, Arizona is located 25 miles west of Wickenburg. We checked out a private facility owned by a gal named Pat. She was quite personable. Pat has two RV sites on her personal property. One is essentially right outside her front door. The other one is off to the side. The 50 amp box for the second site was lying on the ground, exposed to the elements. Of all the facilities we explored, her rates were the cheapest.

There were places to ride directly from her property. Additionally, Wickenburg was close enough to provide some great options for day trips. Nevertheless, this was not what we were looking for. As I stated in last week’s blog, we decided that we wanted to spend the winter at Lazy Horse Ranch in Pearce, Arizona.

Although Alan and I didn’t personally check out Catalina State Park, a reader suggested we visit it when we are residing in Arizona. It looks amazing! We plan to have our LQ trailer in Arizona over the winter, although we will be living in a 5th wheel. I am thinking we should load the dogs and horses into the LQ and go spend a week here. It would also be fun to load the dogs into the car for an active day of hiking, followed by a pig-out session at Sweet Tomatoes!

I have owned an LQ trailer for about a decade. In my past life, before Alan, using or pulling the LQ was totally my responsibility. Alan has hauled boats around for most of his life. Therefore, we were not total novices when we purchased this behemoth 5th wheel. Recently, we decided to move the “fiver” from where we initially parked it over to where our 30amp outlet would be accessible. The spot we chose to park it was not as level as we would have preferred. As we watched this beast “self-level” (NOT an option with the LQ) we flinched every time we heard a groan or watched the thing pitch one way or the other. The left rear wheels were off the ground when the auto level stopped! Here is a somewhat sun-glazed photo of my barndominium and the Fiver. We’ll get it figured out…