Geronimo was a revered and respected chief and medicine man in the Apache tribe.  He was born in 1829 and died in 1909. Did you know that he died as a result of falling off his horse?

Perhaps people in Geronimo’s era found it as difficult as I have to get Wilderness First Aid training! Recently, Alan and I recertified in “regular” First Aid and CPR training. Because we intend to spend many, many hours in the future on horseback, we have decided we’d like to have wilderness first aid training as well. I have found courses in Virginia, West Virginia, Maryland, Vermont, Oregon, and other coastal communities. But none in Kansas, Colorado, or Arizona.

This page is a collection of some of the true stories I use in my wilderness first aid class to illustrate how the wilderness is not dangerous, it’s the people who aren’t prepared, who don’t know what they are doing, or who take inordinate risks, that are the danger. (One major, but rare exception, could be unintentionally provoked attacks by, for example, moose, bison or elk. In most cases staying a proper distance away from animals prevents attacks.)

Talking to equestrians about horseback riding safety is a tricky business. Helmets are a taboo subject for many people. Most folks really don’t want to think about the inherent dangers of sitting astride a living creature in a remote area of the country. Additionally, most horseback riders would claim they don’t fit into the category of “unprepared people” that Mary mentions above.

Looking at data from the National Trauma Databank between 2003 and 2012, the researchers found that equestrian sports contributed to the highest percentage of traumatic brain injuries (TBI) for adults. In the database, 45.2 percent of TBI among adults were related to horseback riding, dwarfing the other causes. The second-leading cause of sports-related traumatic brain injury was falls or hits from contact sports like football and soccer, but that accounted for just 20.2 percent of TBIs. 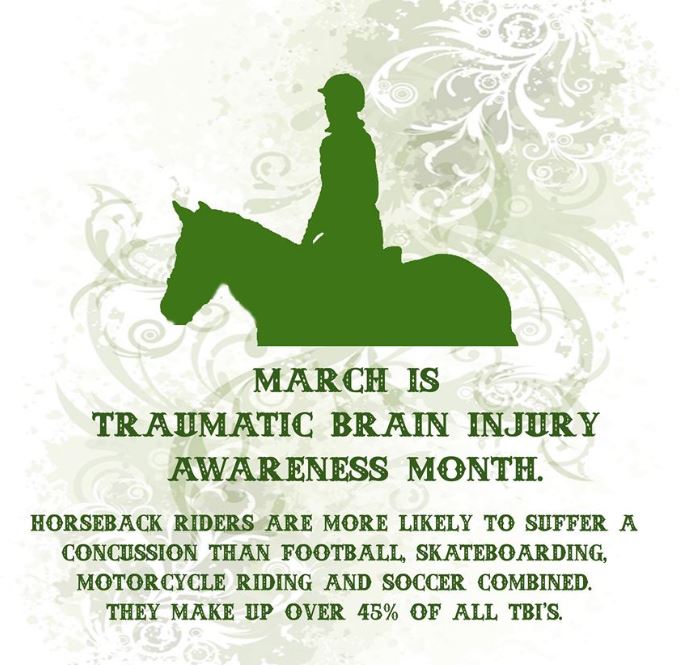 Here is a story about a 12-year-old girl who came off her horse when the horse slipped in the mud. Rain the previous night resulted in wet and muddy trails. Even though she was wearing a helmet, she still suffered severe brain trauma. Presumably, she would not have survived had she not been wearing a helmet. Nevertheless, she has slipped into a coma twice. Additionally, she has had 14 surgeries and requires full-time intensive care by her parents. She is relearning everything… How many of us read something like that and think, “The odds are in my favor. That won’t happen to me or to someone I love…”?

How can I improve my chances of staying safe on the trail?

An insurance company wrote the article above in its effort to suggest “best practices.” They offer this statistic:

The rate of serious injuries per riding hours is higher for horseback riders than for motorcyclists and automobile racers.

Here is another article written by a man who has spent many years providing horseback riding vacations. He offers a list of twenty suggestions for minimizing an accident or catastrophe. Subsequently, he elaborates on each of his bullet points. Among other things, he believes in a hard hat of some type, heeled shoes, proper equipment that is regularly checked, matching horse and rider, not riding with loose horses, and adjusting speed as needed for the terrain. He also states:

First aid and CPR training can possibly save a life.

Alan and I will persevere until we find some way to take a wilderness course. We also hope to get rattlesnake aversion training for our dogs. We are

doing everything we can to maximize our chances of staying healthy and unscathed while pursuing our passion. That includes, of course, wearing helmets, vests and medical alert tags. Take advantage of the St. Patrick’s Day sale and be a proactive and prepared equestrian!

1 thought on “How Did Geronimo Die?”