Last weekend, Alan and I had the opportunity to attend the first-ever gathering of a chapter of Aging Horsewomen, International. To be sure, Alan doesn’t qualify… but he got to go as an old lady’s sidekick! AHI is primarily a Facebook group, although their newly renovated website offers some amazing perks! While I have to admit I’m not really crazy about acknowledging that I am aging, I DO love the wisdom and camaraderie that are available in that group. (The alternative to aging is even less desirable!)

One of the benefits of the new website is the ability to join various special interest groups. For instance, you could join a group of ladies specific to your state. Membership is free for some options, paid for others. As a free member, you can view a map of the locations of other members. It is a new website so it needs to grow and fill out, but it is a great networking tool. Members of the Facebook group have been asking for the ability to find each other in an efficient way. Check it out and join! 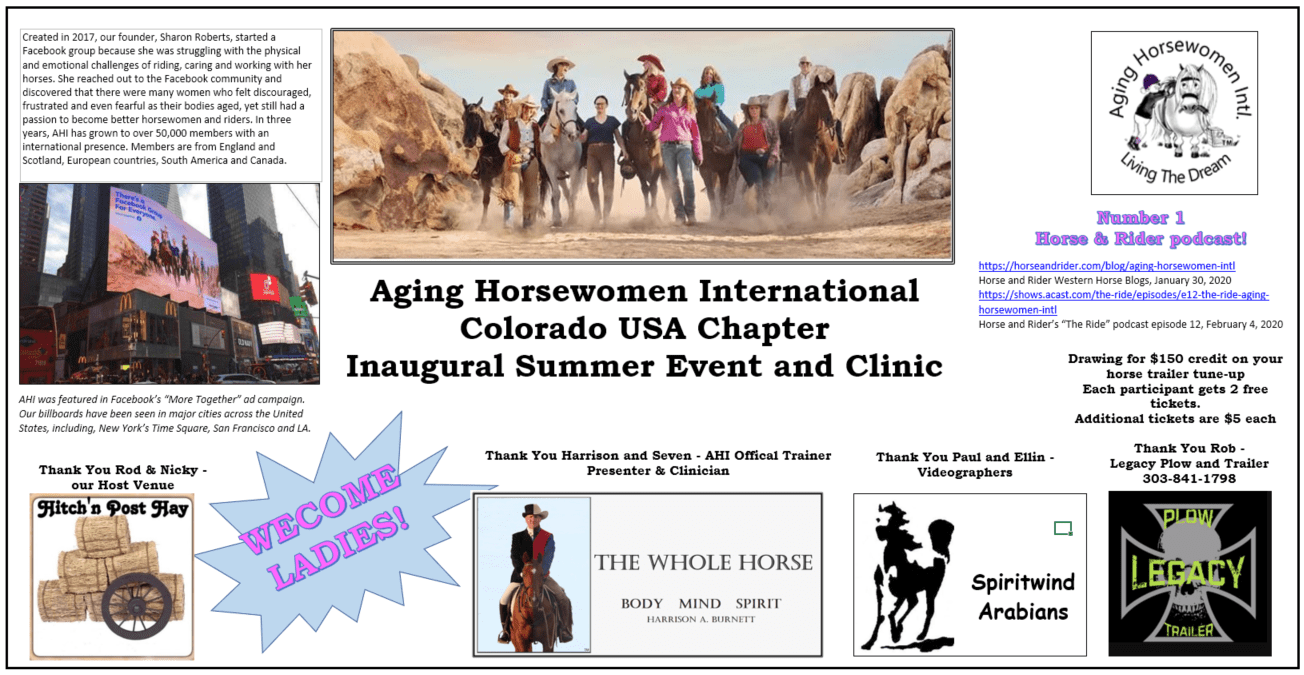 A couple of Colorado ladies in the group organized a clinic at a location about 2 hours from where Alan and I live. Again, this was the first time a face-to-face regional meeting occurred amongst the group members. Sharon Roberts is the founder of AHI. She had hoped to attend but was unable to join us.  I would love to meet her in person, and I was disappointed that she couldn’t come. 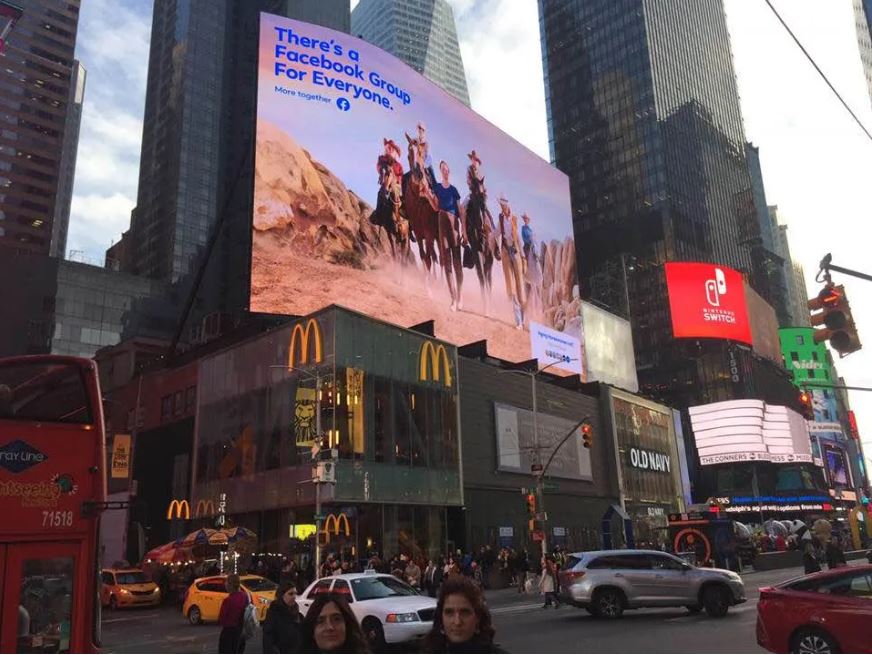 Sharon and two other admins of AHI were featured in a podcast by Horse & Rider magazine this past February. Additionally, the size of the group and the frequency of communication caught the attention of Facebook. Last year, Facebook ran an ad campaign, touting that “there is a group for everyone!” A billboard on Times Square featured AHI women doing what they love to do… playing with their horses!

The clinician at this event was Harrison Burnett. Where do I start to explain the extent to which this man whispers to horses? Harrison has been riding horses since before he could walk. We covered many topics, from the most basic to the most complicated. As this blog series unfolds, I will do my best to impart as much as possible about what we learned.

For instance, Harrison gave us a primer on hooves and shoeing. I must confess, although I completed veterinary school and received my DVM, feet and eyes were the two areas I struggled the most to address. I thoroughly enjoyed the refresher course on hooves and hoof care. Not to mention the fact that I didn’t get any education in veterinary school about shoeing!

Other basic topics included saddle fit, bridle fit, and bits. Additionally, Harrison discussed and showed us the technique for teaching a horse to kneel and/or lie down. For women who are having increasing difficulty mounting or dismounting a horse, this might be a valuable trick. Some people believe teaching a horse to lie down is all about submission. But aren’t we asking our horses to submit to our desires with just about everything we do? As I have mentioned before, it is all about the relationship.

One of the precursors to teaching a horse to lie down is teaching the horse to lead with the feet. This lesson helps the horse to give to the pressure around their feet. Think of the application this has if your horse gets tangled in barbed wire? Rather than fight the wire entangling the feet or legs, a horse can learn to give to the pressure and wait for human help. I will be teaching both Kadeen and Sadie this lesson. I will cover this subject more in future posts. 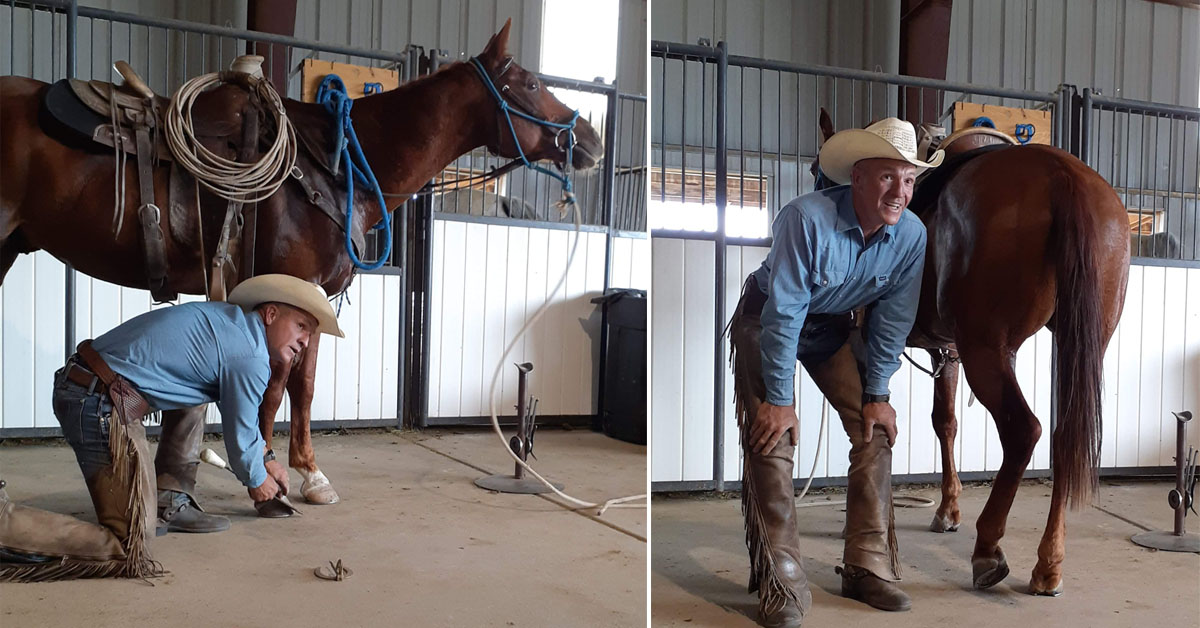 How can I confidently say that Harrison is a Horse Whisperer? You need to read the story of Seven. Seven’s behavior was going to get him sent to the kill pens. That is if anyone could get him there without getting killed. Seven had hurt several people, including the last trainer he had before Harrison. Two years ago, Harrison became Seven’s last stop. At the clinic, we watched Harrison lay Seven down, and work a clinic attendee’s horse while riding Seven. Although Harrison is quick to point out that Seven can still “melt down” at a moment’s notice, that was not at all evident at the clinic. Watch for more information about Seven in future blogs!

There is MUCH more to come. Check back every Wednesday for some amazing information about how to develop and improve your relationship with your horse!

UPDATE ON PAST BLOGS

Vesicular Stomatitis Virus: VSV has now been confirmed on 83 premises in 18 counties in Kansas: Allen, Butler, Chase, Cherokee, Coffey, Cowley, Elk, Greenwood, Labette, Lyon, Marion, Miami, Montgomery, Morris, Neosho, Sedgwick, Sumner, and Wilson. (I get specific Kansas information because my veterinary license is for Kansas. I don’t have specifics on other states.)

VSV has also been confirmed in Arizona, Nebraska, New Mexico, Texas, Missouri, and Oklahoma. Contact the state of destination when moving livestock interstate to ensure that all import requirements are met.