It is very scary to awaken to the smell of smoke. Colorado had more than average snowfall last winter, but the summer has been very dry. As I write this, a forest fire burns a mere 35 miles from our location on Storm Mountain. This photo shows smoke in the sky, as viewed from our deck. The mountain residents are jittery. Sadly, this is one of four fires currently burning in Colorado.

The Cameron Peak fire started on Thursday, August 13th. Currently, it has burned over 12,000 acres and is 0% contained.  How scary is that? My husband and I are discussing our exit strategy if we find ourselves needing to evacuate. Our “non-fire” plan is to leave in about a month and hit the road with all the animals. This fire has changed our timetable. We recently cleaned our LQ trailer in case we need to leave sooner. We came home to ash and soot on our deck and vehicles. The air quality in the Loveland/Fort Collins area, and our town of Drake, is very poor.

National effects on the horse industry

I have been finalizing our plans for our 6 weeks of equitrekking this fall. (Assuming it doesn’t turn into longer than that if we must leave early!) One of the places we will be staying several times is in Lexington, Kentucky. This facility is a frequent layover for national professional horse haulers. There have been cancellations related to the Pine Gulch fire impacting the area around Grand Junction. Additionally, the Grizzly Creek fire has closed portions of I-70. Again, horse haulers are unable to complete their itineraries.

A friend of mine was scheduled to stay at Rawah Guest Ranch in September. It isn’t going to happen… The horses have been evacuated and other dude ranches are covering the reservations. It is so sad… much of Colorado’s beautiful forest is burning.

The Bobcat fire on Storm Mountain

In 2000, the Bobcat fire burned the ridge very, very close to our current property. It covered over 10,000 acres and destroyed 22 structures. Several of our neighbors lived here when this tragedy occurred. Our friend Georgia was a firefighter at that time. She had this to say when asked about that experience: 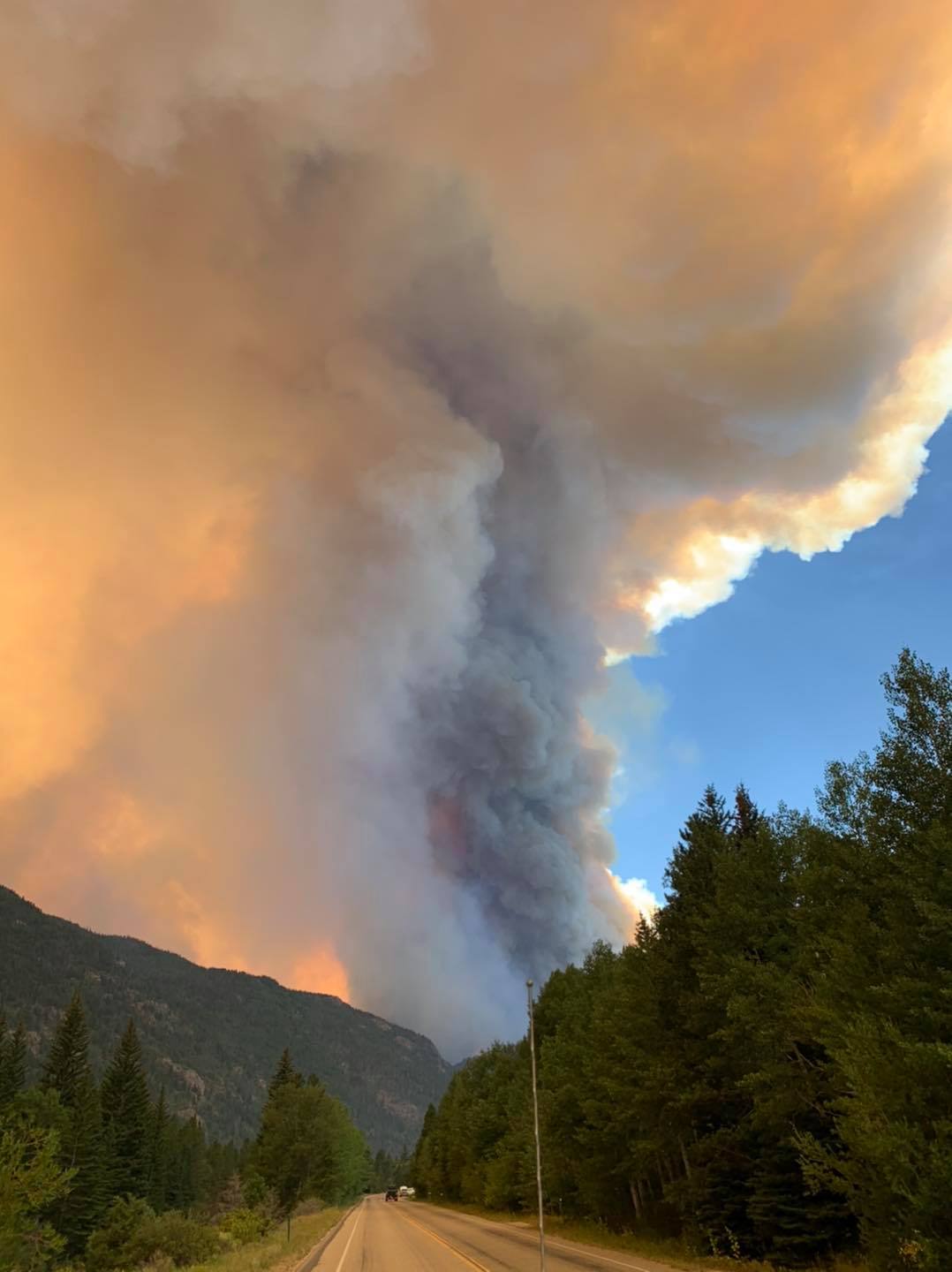 Georgia had a dog, and a mare and foal at the time of the fire. She turned them all loose. Many horses and some llamas were turned loose. Most of them banded together around the lake and in the area of the community where our home is. Georgia’s dog was recovered at a facility in Loveland which housed evacuated residents.

Another of my neighbors raised and showed Keeshonds. They left the mountain at 7:30 AM. They had been told the fire was under control. It was 10:30 AM when they returned. Officials denied them access to their home. They had seven dogs in their house. Carolyn said she spent much of the day pacing and vomiting! Eventually, a forest ranger escorted Ed to their home and he was able to collect the dogs.

Learning from past experience

My neighbor who lives in the next house on our road is the wife of a county sheriff. (It was their goat that was eaten by Covid the bear a couple of weeks ago.) While they didn’t live here during the 2000 Bobcat fire, they were here for the 2013 flood. (More on that momentarily.) Deedre, like us, is worried about the current Cameron Peak fire. She had this to say:

I am a bit concerned for our plan this year.  We don’t have a large animal trailer obviously for the donkeys. If there is a voluntary evacuation and we have time to get a trailer to rent we will be okay. But for a quick evacuation, we will get every goat we can in the large dog crates and let the dogs just be in the car. We thought about tagging the donkeys and letting them free worse case. It’s seeming a little more real looking at the sky.

Storm Mountain residents were isolated during the flood when the bridge to our only access road was washed away. Some residents stayed and looked after animals left behind. Emergency personnel evacuated some residents using helicopters. Fortunately, residents who were evacuated by helicopters were able to take their small animals with them. Those with livestock had to ride or lead them off the mountain or turn them loose. The only other road out was barely passable–it hardly qualified as a road! One neighbor’s 30-year-old horse never recovered from the stress of evacuation. She had to make a tough decision about him shortly after the flood.

Something we have never had to worry about before 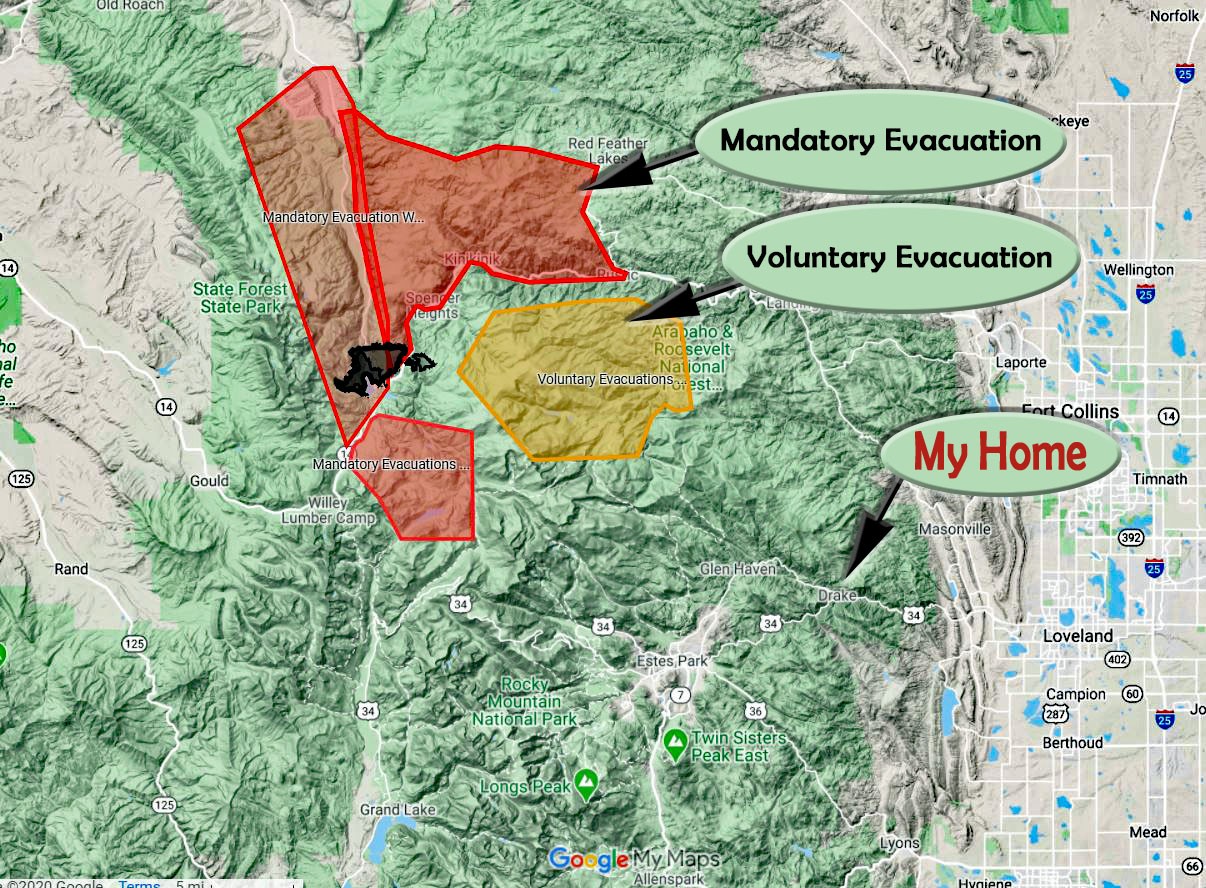 It is very unnerving to awaken to the smell of smoke and see ash deposited on your vehicles and deck. In Kansas, we had tornadoes. But forest fires were not a concern. We can be mobile very quickly. The horse trailer is ready-to-go and we have the ability to get all of our animals off the mountain. We have gathered up our important papers so they will be accessible while we are equitrekking this fall. We are as prepared as we can be to deal with a disaster.

Do you have an evacuation plan for your animals in the event of an emergency? Have you done everything you can to ensure their safe return to you, no matter what happens? Trust me, it gets a lot more real when you see and smell smoke. Our two horses have been wearing tags woven into their manes for months. It is important for owners of animals to have an evacuation plan.

UPDATE ON PAST BLOGS

A few weeks ago, I wrote about paying a chunk of change to have all four of our dogs trained to avoid rattlesnakes.  Well, guess what? It has already paid dividends. Recently, I was walking Mica, our big, goofy, black German Shepherd. He was about 6-8 feet off the trail, at the top of the mountain where we walk nearly every day. Suddenly, he leaped backward as if he had stepped on hot coals. It was then that I heard the rattle. At that moment, I was eternally grateful that we had paid for “canine college”. I have NO doubt that he would have engaged that snake had he not received that training. I snapped this photo while standing on the trail, not zooming very much either!

Are Microchips the Answer?

Last week I wrote about microchipping. In my inbox this week, I received an email from HomeAgain, one of the leading animal microchip companies. It was an article defining fact vs. fiction when it comes to microchipping small animals. Apparently, a prevailing belief is: “My pet wears a collar with tags, so he doesn’t need a microchip.” HomeAgain states that as fiction, and their fact is:

All pets should wear collar tags imprinted with their name and the phone number of their owner, but only a microchip provides permanent ID that cannot fall off, be removed, or become impossible to read.

I did hear from a reader that she had chips implanted in two horses, and a year later they couldn’t be found. Another reader interpreted the article to state that microchips are of no value. That is not what the article said. Microchips do have value, but even in the small animal world, readily visible identification is the best way to get your animal returned to you.

Free shipping for the month of August on all ID MyHorse Emergency Medical and Identification Tags.