The opportunity to participate in a “bucket list” ride-of-a-lifetime came at the end of my second summer in Estes Park, Colorado. Because my father resided in an Estes nursing home, I spent most of the summers of 2013 and 2014 riding in the Rockies and looking after him. My tall, leggy Arabian had more than enough stamina to climb the mountains, and after spending the summer in the high altitude he was fit and conditioned and adjusted to the climate.

August is the best month to cross the Divide

One of my Estes friends, Kathy Walker, and her husband Cody manage the Hi-Country stables that have been a fixture in Estes Park since the 1960s.  Every August, there are 8-10 opportunities to ride across the Continental Divide. Because of the high altitude, August is the only month where conditions are favorable enough to attempt this ride … snow is present often in July and returns as early as September. The park service has to give permission before the first ride of the year is planned, confirming that conditions at the top are suitable and safe. Once the riders had to turn around and come home before even getting near the top because visibility was less than a few feet due to low clouds.

Typically, only livery horses belonging to Hi-Country are used on this ride, and these mounts are chosen carefully. They must not be so old that it is too hard on them, or so young that they are not safe and experienced. Because Kathy had ridden several times with me and my Arabian, Kadeen, she was comfortable allowing me to participate in the ride. She knew that my horse could make the journey and that I was a competent enough rider to be an asset and not a liability!

I had only 3 days’ notice that I was going to be able to do this, so I scrambled to find a duster. After looking high and low all over the region, I had to settle for an ugly, used duster. This duster wasn’t oiled, a fact which definitely came back to haunt me later! It fit and it was warm … that is, until the cold rain soaked it and added five pounds to my body. But more on that later …

I was told to report to Glacier Creek Stables inside Rocky Mountain National Park at 5:30 AM on Thursday, August 14, 2014. I trailered over to the stable and arrived on time or a little early, only to discover that the rest of the group was about ready to leave because there was already concern about the afternoon weather! The group consisted of Chris, the guide; 2 gals who had also been livery guides that summer for the Moraine Park stable; and a father/son pair who were actual “tourists”. ALL of the horses were livery horses except mine. Cody helped me quickly tack up but he still sent the other riders on ahead of me. However, in very short order I found myself riding alone through the woods in the early dawn light, in hot pursuit of my group.

I caught up in about 15 minutes and the adventure continued. At first, I was on familiar ground. Many times I had ridden the Glacier Creek trail, past Sprague Lake (elevation 8200 feet) and up towards the Bear Lake trailhead. A little north of Bear Lake we headed west on the Flattop Mountain Trail. At this point, we were riding through forests of evergreen trees and aspens. We used twisting trails frequented by wildlife, hikers, and equines alike. Kadeen and I followed Chris, who was riding a half draft paint gelding who had one speed. That pace was not nearly fast enough for my Energizer Bunny. But Kadeen adjusted and up we climbed. The weather was cool but I was warm enough.  As we continued to climb, we rose above the tree line and the wind picked up considerably. I put on my warm but ugly duster.

When we were on the tundra, there was nothing along the trail but rocks, sparse grass, occasional pools of water nestled in the rocks, and a spectacular view of the mountain range. Kadeen decided it was time to pass the slowpoke in front of him but alas, it was not to be. We had to follow the guide. It was too windy for many conversations and too breathtaking to want to talk anyway, so we all rode along, lost in our own thoughts. 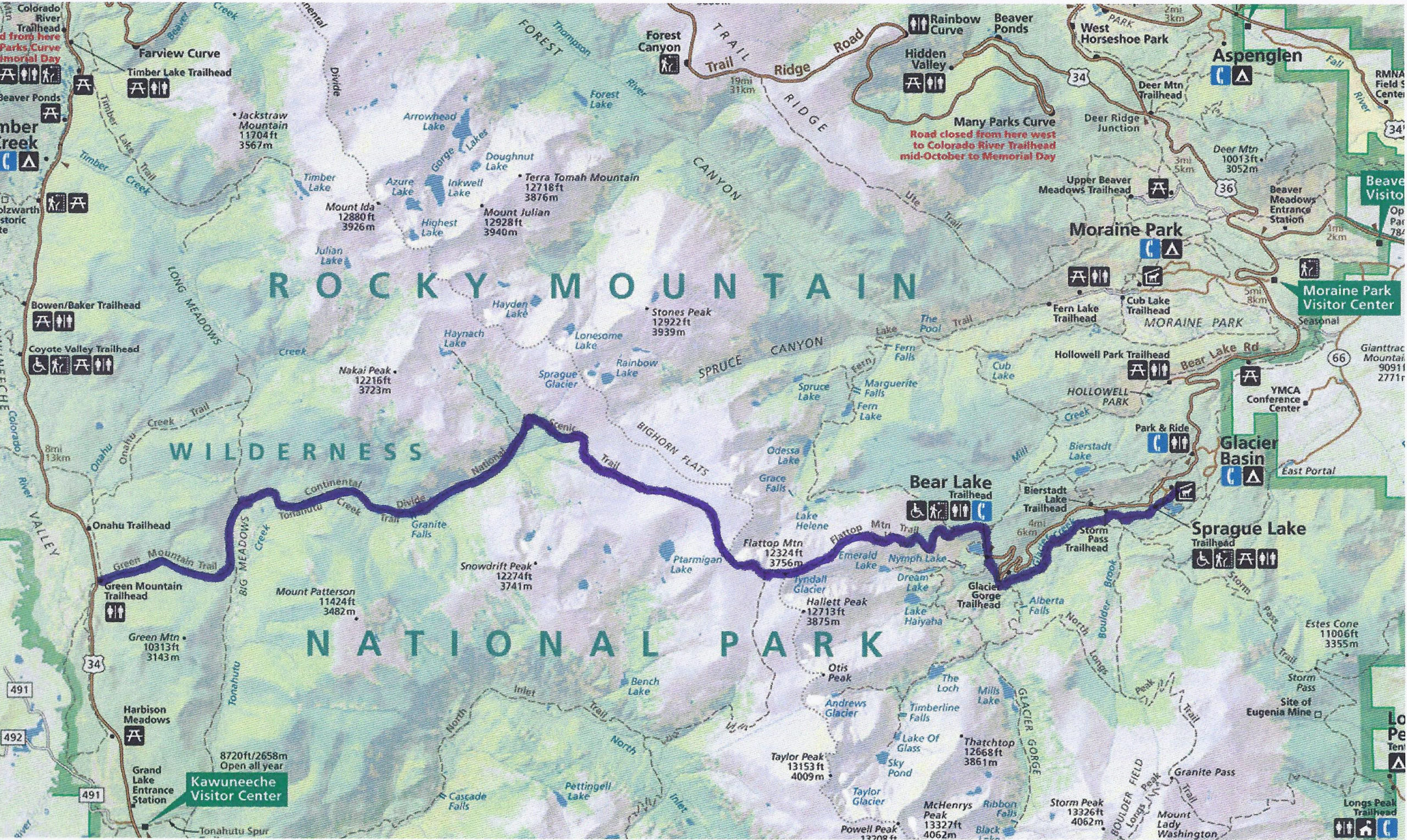 The elevation on Flattop Mountain is 12,324 feet! We had climbed over 4000 feet in about two hours. We crossed the tundra, experiencing expansive views before we started down “the other side” towards the trees below us. I remember the trail on the other side of Flattop as being angled downward to the left, something that was quite noticeable as the drop off was also on the left! It was not a particularly wide trail and clearly water runoff had influenced the topography of the path. Flattop trail became the Tonahuto Trail about halfway across the tundra.

Up to this point we had avoided the rain, but we knew our luck was running out. We stopped a bit early for lunch, hoping to beat the weather. However, within 10 minutes or so, the sky opened up. We hurriedly tacked up and headed on down the trail, having stopped for no more than 20 minutes. In very short order, my ugly duster was now ugly and cold and very heavy.

We rode on in relative silence as the rain came down and the trees became more and more plentiful. Soon we encountered beautiful ponds with mist rising from the rain. Eventually, we reached Big Meadows, shortly before picking up the last trail of our journey, the Green Mountain Trail. Big Meadows was lush and beautiful.

Several trailheads came together at the point that the Green Mountain Trail began, and the trail widened considerably. My short-striding guy had endured enough. Abruptly, he pulled around the slow-going draft horse and headed on down the trail at a good clip. Chris gave me permission to take the front and Kadeen happily stretched out his stride. At this point, we had covered at least 17 miles, and not easy ones at that. Kadeen and I led the rest of the way, doing what we often do when riding with slower-paced companions. Periodically, we would stop and wait. We burst into the Green Mountain Trail parking lot ahead of the others. We were tired, wet, cold, and exhilarated! It was about 4 PM.

We didn’t have to wait for long before Cody arrived to load the horses into the trailer and haul them back to the livery. There was room in the truck for only 6 passengers, although there was room in the trailer for my horse. My neighbors had agreed to pick me up. So everyone, including my horse, headed east while I waited for my neighbor to arrive. I didn’t have to wait long. Soon, I was in a warm car, wearing a borrowed dry jacket. I burrowed into the seat and reflected on the amazing ride I had just completed.

The ride back home

I didn’t learn this until later, but apparently, the other livery stable hands referred to my leggy Arabian as the “Alien Mosquito”! True, he didn’t look anything like any other horse at the stable! And Cody told me (after the fact) that he had to do a lot of processing himself when I showed up that morning at 5:30 with my stretch riding breeches, my helmet with a GoPro attached, and my “Alien Mosquito”! But Kadeen earned their respect for making the journey. Indeed, he was right behind the leader and well ahead of the other four livery horses most of the time.

My GPS clocked this ride at a hair short of 20 miles. However, the livery website quotes 26 miles if they ride all the way to Grand Lake. It was unquestionably one of the most amazing rides I have ever done. I was tired for sure, and just a little sore, because I had been riding all summer.

Not the best ride for everyone?

This is not a ride for an inexperienced or under conditioned horse. Many a “newbie” rider has sat astride a livery horse and made this trip. Unfortunately, some didn’t look so happy on the other side! Even though I have done it once, I would not feel comfortable taking a group over myself. I would highly recommend that anyone interested in doing this use local horses unless you are going to be there for a long enough period of time to condition yourself and your horse. Unfortunately, horse owners have few options for stabling in Estes Park.  Furthermore, you have the additional issue of needing to trailer back to where you started.

One of these days I’ll take that 6 hours of GoPro footage and put together a video. That would allow me to relive this ride again and again! But in the meantime, I’ll just bask in the memories of an amazing day in the Rocky Mountains!