I can’t possibly count the number of times accomplished horsepeople told me I needed to relax to get my horse to relax! Sure, easy for you to say! How is a person supposed to relax when they are sitting astride a volcano about to erupt?

A trip to Fort Robinson

One of the first times I received this advice was on a trip to Fort Robinson, Nebraska. It was within the first year that I had my gelding, Kadeen. We joined a group of Arabian owners. There were many accomplished riders in that group. I was there alone, with just my horse and a couple of dogs. One guy, in particular, took me under his wing.

Kadeen jigged for most of the time we were on the trail. Heck, he jigged most of the time I was on his back! I clearly remember my mentor trying to get me to relax. Ideally, if I relaxed, Kadeen would relax. “Stroke his neck, talk to him!”, he’d say. I remember being on the trail on top of a cliff and having my horse jigging… not good!

At the end of this trip, there was a dinner with various awards presented. Kadeen and I were the not-so-proud recipients of “The Dancing Horse” award!

The weekend from Hell

At some point early on in my journey with Kadeen, we spent a weekend camping with a large group. Nearly everyone else was riding a Quarter horse. That weekend, Kadeen reinforced every negative stereotype about Arabian horses and added a few more… When tied to the trailer, he did Airs Above the Ground. I don’t think he flat-foot walked the entire weekend. He was nervous and wound up the entire 3 days. I was a wreck and totally wiped out. Additionally, I was somewhat the laughing stock of the entire camp. You could see the thought bubbles above their heads… “That’s what she gets for riding one of those crazy Arabians!”

I decided maybe I had the wrong horse. I went home and resolved to find “a better horse”. After checking out a few horses for sale near me, I realized I already had an awesome horse. He was not the problem. I was the problem. The other horses I rode couldn’t hold a candle to my guy’s training, intelligence, conformation, or beauty. I had looked at Volkswagens and I already had a Lexus! 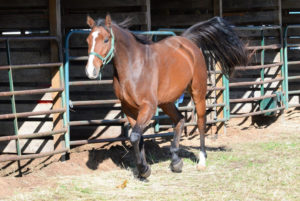 Two years ago, I wrote a series of blogs called Does Your Horse Respect You? It is a 5-part series. Mostly, it focuses on my attempts to create a bond and a relationship with Finn, a gelding I used to own. I wasn’t successful. Finn lacked the confidence to be a trail horse. He preferred the predictability of the arena. I couldn’t create confidence in him. (See When to Hold and When to Fold.) In the photo above, he’s running loose at horse camp after busting his lead rope.

During my 2 years of working with Finn, I did my best to relax in the face of his tantrums. It’s totally not easy to be relaxed when your horse is doing a “Hi Ho Silver!” Ultimately, my husband and I decided it wasn’t fair to try and make Finn do a discipline he hated. We sold him to a guy who rides in the arena. Did I fail with him? Or did I realize I was trying to make him into something he couldn’t be?

Now I am watching Alan build a relationship with his relatively new mare, Sadie. They are making rapid progress. She’s not nearly as tightly wound as Kadeen used to be. Nevertheless, she can wind up a bit. I find myself telling Alan to relax, to help his horse relax. I describe that process the best I can. But how do you explain how to make your body do the opposite of what comes naturally? When you are sitting astride a horse that feels tense, it is a natural response to tense up yourself.

I wish I had some very clear, concise recommendations. I don’t. It took me several years to put it together. I had numerous people providing feedback at different times, in different situations. I kept listening and trying to apply their advice. Honestly, I can’t even pinpoint the period of time where I actually figured it out. I just know that one day, I could do it. When Kadeen would start to wind up, I’d settle my seat. I’d “make like water” and sink my derriere into the saddle. I would talk to him… “No, buddy, we’re not going to get wound up. We’re going to relax and just walk.” I believe telling Kadeen what we were going to do helped me believe it too!

I experienced a similar epiphany when it came to pulling my big trailer. I used it sporadically, so every Spring it seemed as if I had to reinvent the wheel. It was scary to pull that big thing! One year I climbed into the truck and realized, I can do this! And I did. For whatever reason, my tension evaporated.

I’m not perfect at it, by any means. There were multiple times with Finn that I struggled to stay calm in the face of his shenanigans. But with Kadeen, I can’t remember the last time I tensed up. We have enough trail miles, enough time together, that we are truly a team. He knows I will take care of him, and he takes care of me.

There is one more component to this that was hard for me to learn. I had to figure out some give-and-take. Rather than require that he do everything that I wanted whenever I wanted it, I learned to work with him. That is not to say I wasn’t in charge. Rather, I learned to ask rather than tell. He was able to listen to me when I suggested he relax because we actually worked together as a team. If he struggled to be anything less than the lead horse, I’d let him lead for a while. Eventually, we’d move back in the line. Give a little, take a little. Relax, work together.

It is a process to become a team. You must relax before your horse can relax. You must also trust your horse enough to relax. It’s complicated, isn’t it