Pushing cows around can sure be a lot of fun! The last opportunity that Kadeen and I had to herd cattle was about 8 years ago. We don’t know much of anything about it, but we sure do have fun! He LOVES being the boss and makin’ those doggies move!

Alan and I drove from Colorado to Culpeper, Virginia for Daniel Boone Days. We stayed at Andora Farm, home of Tom and Pat Seay of Best of America by Horseback. About twenty other people joined us. Most came from a lot closer than Colorado! A few of the participants were regular visitors to the farm on Team Penning nights. They had much more expertise than the rest of us!

Daniel Boone Days in Culpeper, Virginia is an annual event. Guests from the community had access to the farm all day Saturday and Sunday. The farm provided free hayrides both days. The guest cowboys and cowgirls interacted with the community and explained some of the basics of horse riding and horse care. Our 4 dogs were a huge hit with the public.

On Friday afternoon, we began the festivities by bringing the cattle in from the field. Sadie wasn’t too sure at first, but she quickly warmed to the idea. Kadeen had no problem wading into the herd and bumping them along. After we got them to the farm, we sorted them… horned cattle first, all other colors but black, and then the black ones. Ranch staff stuck numbers on the back of the cattle, although several of the numbers were missing by the 3rd day.

Friday night was our first “competition”. For those of you, like Alan and me, who have no idea about Team Penning, let me explain the basics. The practice was developed for cattle in a huge, unrestricted area. Small pens were set up, and cowboys sorted cattle into the pens that required vaccinations, medical services, tagging, or some other need.

Now, it is a competition at many venues. Three riders have a limit of 75 seconds to get three cows into a pen. More often than not, our rag-tag group of riders exceeded their time limit. But we sure had fun doing it! On Friday night, all of the guest cowboys and cowgirls rotated through the arena, with no public spectators at that point. 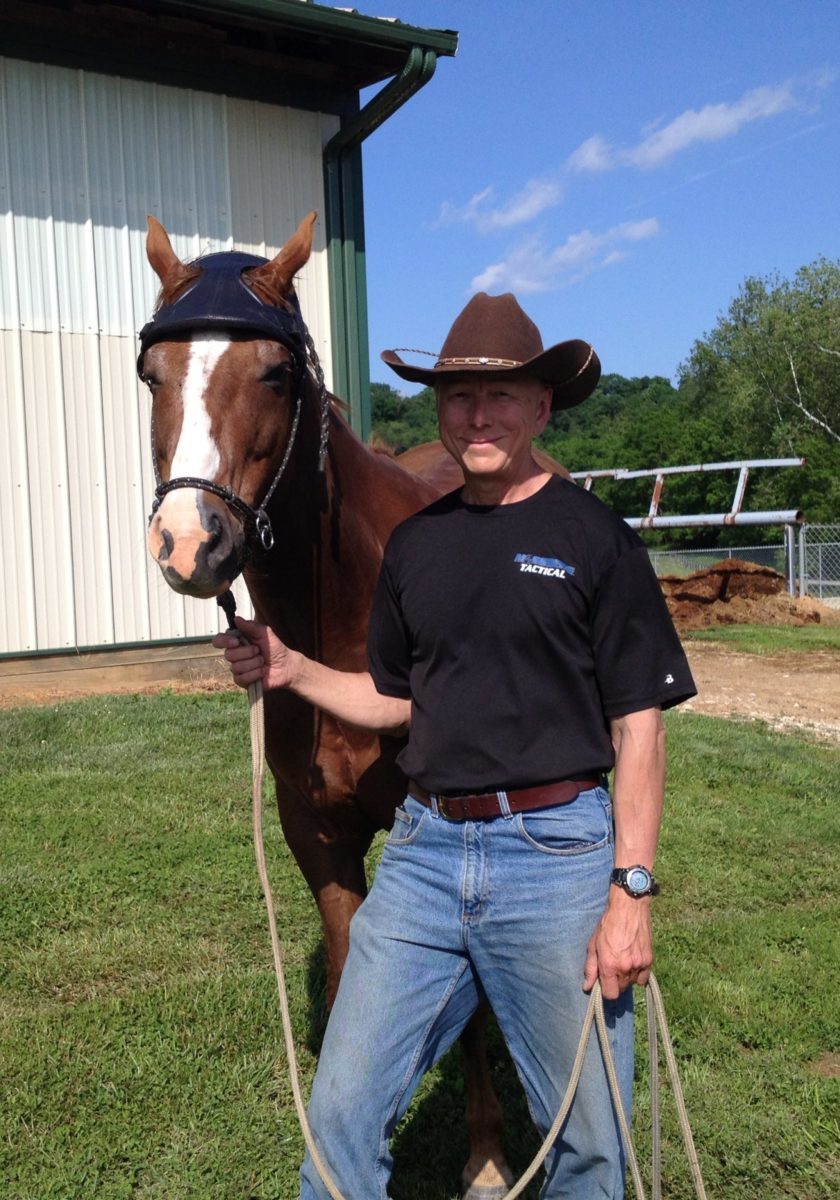 Since the competition involves 3 riders, Alan and I needed to find a third “cowboy”. We teamed up with Butch. Butch told us, early on, that he was a “newbie”. He’d owned his horse for 4 years, and had experienced difficulty with him in the past. We did several rounds of Team Penning on Friday night and had tons of fun. We even got the correct three cows in the pen in 62 seconds!! That was hands down the best score of all the “non-cowboy” cowboys (and cowgirls.) 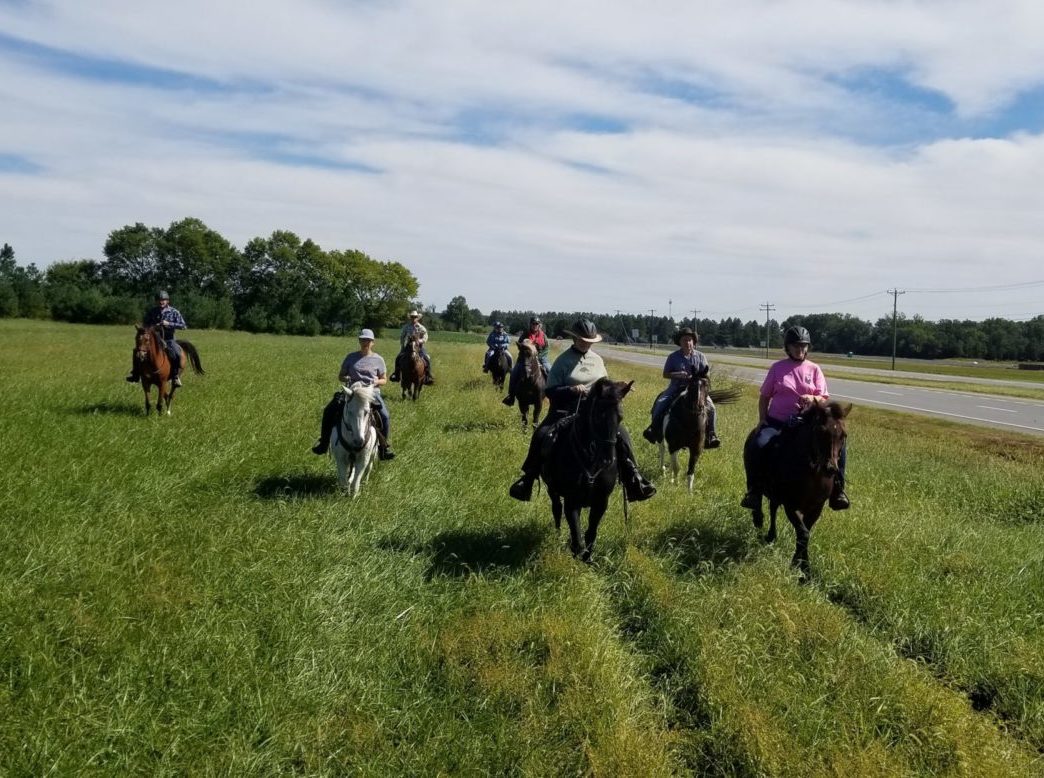 Saturday morning we once again brought the cows in from the pasture. Saturday afternoon we took a break from Team Penning and enjoyed a trail ride around the property.  We rode with a half dozen other riders. Alan and Butch ended up talking about Butch’s horse, who was starting to act up. Alan shared what I had told him about relaxing when your horse is escalating.

About 5 minutes after this photo was taken, Butch’s horse reared up and Butch came off. He ended up breaking 2 ribs and puncturing a lung. After spending a few days in the hospital, he was discharged to recover at home. Apparently, he has come off of this horse before. He is now planning to follow the numerous suggestions from other horse folks that he find a different horse. Additionally, he realized that a hit-air vest would have allowed him to walk away without rib fractures or holes in his lung. Lastly, he plans to start wearing an ID MyHorse Emergency Medical Information Tag.

On Sunday, the farm was once again open to visitors. However, many of the guest cowboys and cowgirls left early Sunday morning. There were fewer riders for Team Penning demonstrations. Besides, our two horses were pretty much over it by that point. They had dodged and cajoled endlessly for two days and they really didn’t care if the cows moved or not. No only that, but the cattle seemed listless as well! Some would lie down and a rider would yell, “Speed bump!” as they attempted to maneuver around a  prone bovine!

Sunday afternoon found us entertaining visitors with our dogs. Additionally, we did some preliminary packing in preparation for our departure Monday morning.

We stayed at Newtown Station Layover in Lexington, Kentucky both going and coming. I highly recommend this place. Really nice folks and they provide full-service care. On the way out, the horses were stalled but had a chance to go into a small pasture in the morning before we loaded up again. On the way back, we opted to just let them hang out in the pasture overnight.

Our fun month of October

Here is a map of our next 30+ days. To the best of my ability, I will write in real-time, describing our adventures. I am certain that Wi-Fi will be an issue. Stay tuned! 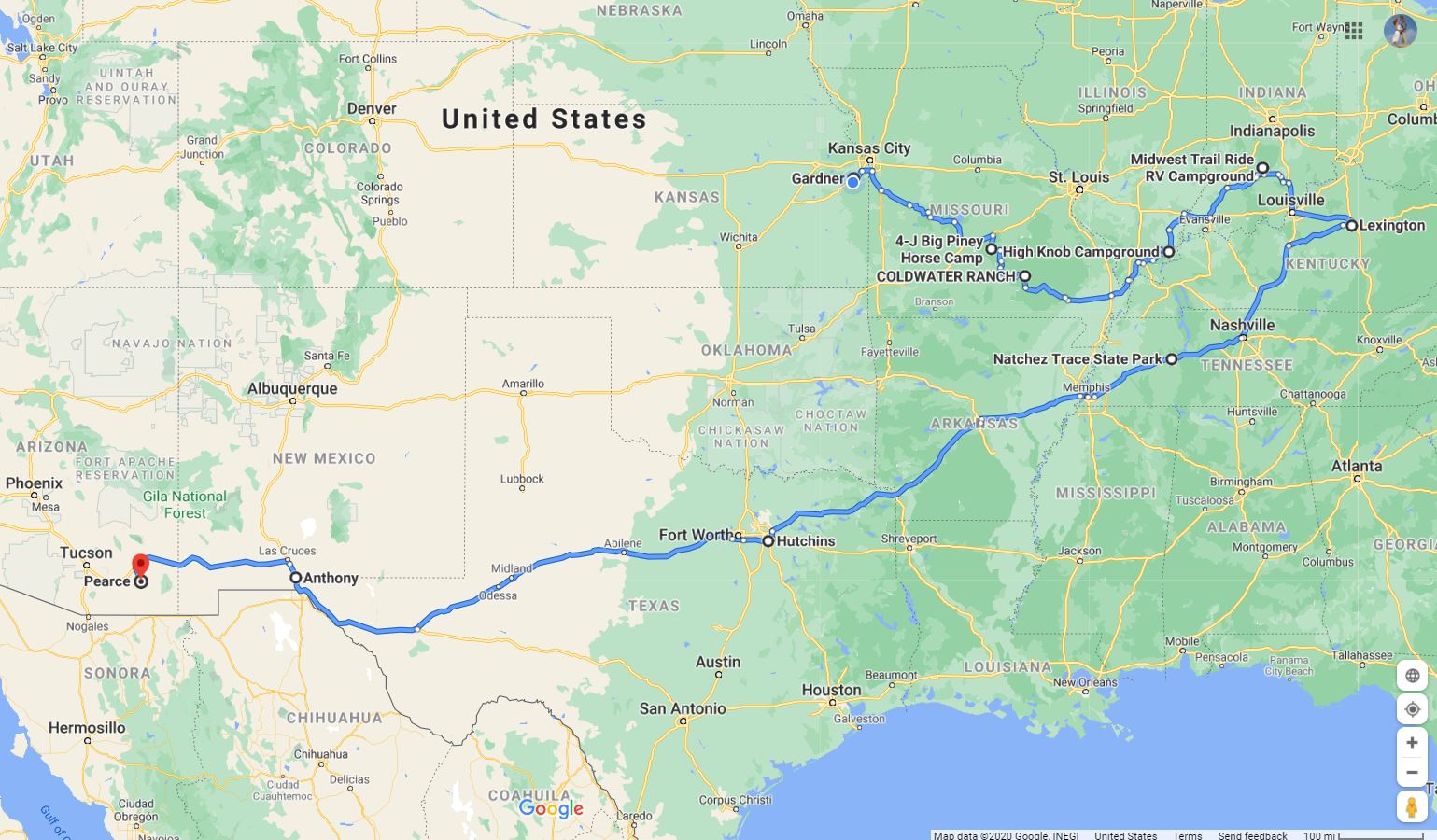