Last week, I preempted my original blog schedule to write about the fire that was threatening to consume our home. A week later, Mother Nature’s snow has assisted the incredibly hard-working firefighters and police officers… but we are far from out of danger. But happily, at least for now, our home is still standing!

Our Storm Mountain neighbors have been under mandatory evacuation orders since nearly two weeks ago. Some of them sought refuge at the YMCA camp in Estes Park. Sadly, they were then ordered to evacuate Estes when the East Troublesome fire jumped the Continental Divide and moved 17 miles in one day. Our friends in Estes told us,

Several of my friends posted photos of how dark it was at 2 PM on the day of evacuation. Alan and I experienced something similar when we were in Loveland prior to our mid-September departure. Street lights on in the middle of the day, with an orange sky. The photos from Estes were worse. One of my friends, who is not easily rattled, said it was the most frightening thing she had ever experienced.

When I owned a home in Estes Park in 2013 and 2014, I became friends with and rode with many local equestrians. Those folks had less than 30 minutes to evacuate themselves, much less their horses! I haven’t reached out to many of them yet, as everyone is still scrambling to deal with the basics of life. One gal posted:

So many people weren’t able to get horse trailers in time to get their horses out and they spray painted their phone numbers on horses (and possibly livestock) and wrote info on their hooves and let them loose (closing them out of the corral so they didn’t just go back in.) So if you or someone you know comes across horses in the next few days, that’s what to look for.

As of this writing, the mandatory evacuation in portions of Estes Park has been downgraded to voluntary. However, many people aren’t returning, as internal services are affected and the fire is still very close. The snow has slowed, but not stopped, the fire’s spread. Storm Mountain is still under mandatory evacuation as far as I know. We are hopeful that our heat has turned back on, now that the power is back on. Honestly, we don’t know. If we don’t have heat, we have frozen pipes for sure. Our camera system is working, which gives us great peace of mind. But it doesn’t show the temperature inside the house! 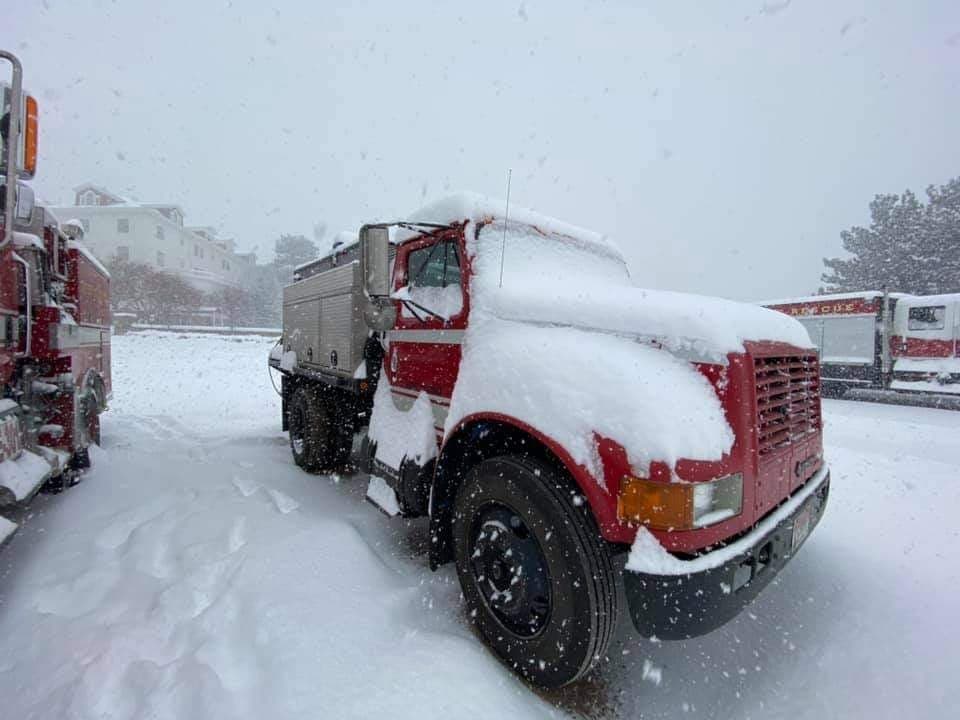 While the snow was an incredible blessing in terms of providing moisture to slow the fire, it made fighting the fire all that more difficult. Imagine trying to deal with single-digit temperatures while manhandling water hoses. Our access road to Storm Mountain can be challenging under normal conditions. A firetruck slid off the road in the snow, creating even more hassles.

Our new twice-daily normal is to listen to Facebook video fire updates. Not only am I following the Cameron Peak fire news, but now we listen to what is happening with the Troublesome fire.  While we were camping in southern Indiana, I had to drive 5 miles to get two bars of service so I could stream the updates! Again, I can’t say enough positive things about the firefighters, the sheriff’s department, and all of those involved. And we are so proud of our mountain community… the outpouring of love, support, and tangible help has been amazing.

This morning, the news reported new fires erupting in California. I never dismissed that news in the past. I always worried about both people and critters as they ran for their lives. However, I didn’t have first-hand knowledge of what it is like to be threatened by wildfire. You can’t truly understand what another person is experiencing if you haven’t experienced it yourself.

Alan and I have been having a wonderful time, notwithstanding major stress over what is happening in Colorado. I have several really great horse camps to write about. When I can focus on something other than my home and community, I’ll share some great photos and information about some beautiful places to ride.