Kentucky Horse Park is one amazing place to visit for anyone who loves and appreciates horses. Either due to COVID changes or my poor planning, we only had one day to spend there. We had planned Monday through Wednesday in Lexington, only to learn the Park was only open on Wednesday. In spite of the fact that many attractions were closed or altered due to the pandemic, we still didn’t have enough time to really see everything. Although I’m not usually a museum junkie, this museum was the exception. I could have read about horse history for days…

Kentucky Horse Park is a 1200 acre working horse farm. It accommodates over 500,000 visitors in a normal year! Their mission statement is…

…To celebrate our relationship with the horse through education, exhibition, engagement, and competition.

In addition to being one of the state’s most popular tourist destinations, it is known for world-class competition facilities that host prestigious equine shows and competitions.

Before the property was Kentucky Horse Park, it was part of the Walnut Hall Stud Farm, the oldest Standardbred farm in the country. The 1224 acres came with some incredible buildings and improvements, including the 473-foot-long Big Barn. It is believed to be the largest, or at least one of the largest, barns ever built. Sadly, it was closed to tourists when we visited.

In addition to the barns, there were fences, paddocks, farm roads, a farmhouse, and a training track. Construction on the Park started in 1974 and was completed four years later.

As I mentioned above, we didn’t really have enough time to do the museum justice, much less have enough time to tour the barns adequately. But touring the barns was not really an option. So much was closed because of COVID restrictions. They did showcase various horses outside at various times, but it was difficult to schedule your time around their 15-minute spiels. I would have loved to be able to watch the Breed Parade, although breeds today don’t look like they did when I was a child. Morgans look like Arabs and Arabs look like Saddlebreds!

During our time there, the National Horse Show was in full swing. But of course, no spectators were allowed. That would have been so awesome to watch!

We are definitely going to plan another trip through Lexington to revisit the Park.

For the first two years, after I met my husband, he rode my awesome gelding, Kadeen. When it came time to buy him a horse, I asked if he wanted an Arabian, or something different? I didn’t want to limit his choices with my biases. He said, “I want one just like Kadeen!” 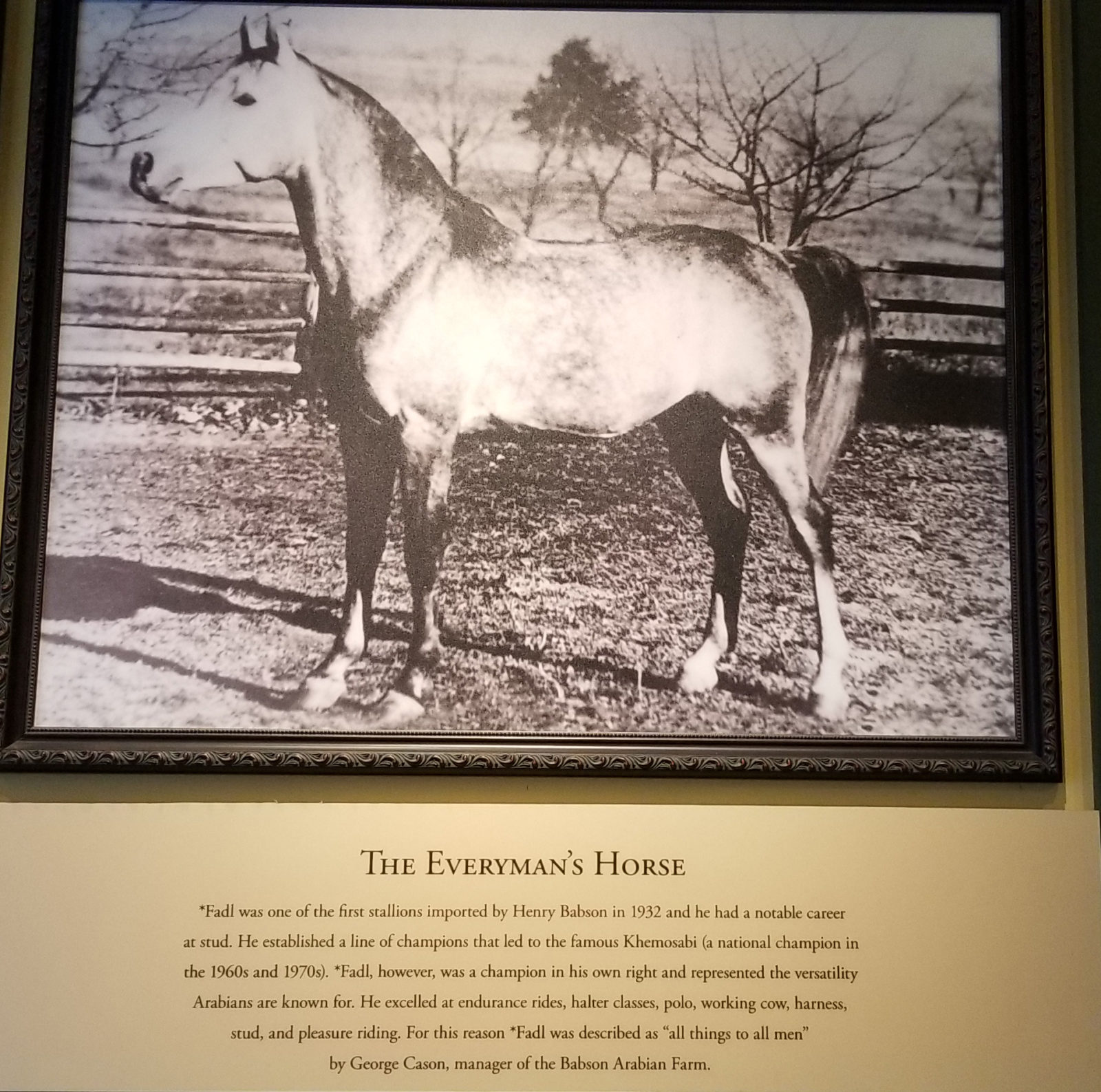 There is an entire section in the museum about Arabian horses. I was particularly interested in the story of Henry Babson and the Babson Arabian farm that existed for many years in Grand Detour, Illinois.

In the early ’80s, when I was still a veterinary student, I had the privilege of meeting Homer Watson, Henry Babson’s farm manager. I also met John Vogel, Homer’s protege. Homer had a valuable mare that was unable to get pregnant due to damage from her first foaling. At that time, I had a half-Babson mare. I was hoping to try embryo transfer on my half-Babson mare, while I was still in veterinary school. Homer offered to let me try on his more valuable mare instead. Sadly, we were not successful, but the mare remained with me until her death in her early 20’s. One of these days I’ll write an entire blog on that experience…

Homer Watson died in 1990 and John Vogel continued the breeding program for another 9 years. Ultimately, Homer’s descendants opted to close the farm. Henry Babson’s breeding program is now in the hands of numerous other farms that continue his famous Arabian lines.

As a lover of the Arabian horse, I was very glad that we still had access to that aspect of Kentucky Horse Park. I hope you enjoy these photos and a bit of a pictorial story about Arabians.