Alan and I rode the Crozier Mountain trail last summer. I wrote this blog shortly after our ride but didn’t post it. I decided to share it this week… Alan and I need to ride this again and see how different it looks after the fire. Glen Haven was severely impacted by the Cameron Peak fire. However, the trail is open, which is a good sign. On July 4th, Glen Haven was briefly evacuated because of flooding. Water runoff is a huge problem after the fire. A large mudslide temporarily closed Highway 43 between Drake and Glen Haven.

When I lived in Estes Park during the summers of 2013 and 2014, I am pretty sure I rode Crozier Mountain. Therefore, Alan and I decided to give it a go.

There are three approaches to Crozier Mountain, the Garden Gait Trailhead, the Rainbow Trailhead, and the Glen Haven trailhead. All are open to horse traffic, and dogs on leashes. They all are accessible from County Road 43, which is the road that leads to the access road to “our” mountain. 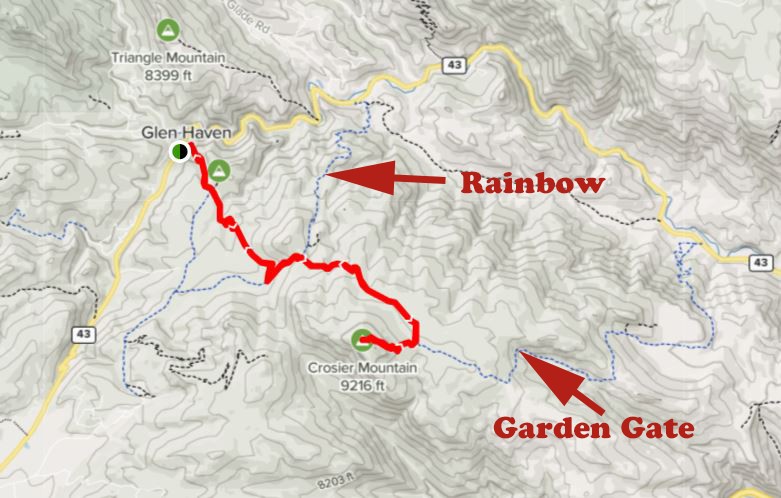 I don’t remember which of the three I rode 6 years ago, or even where we parked. I am virtually certain that it was not the Glen Haven trailhead, which is the one Alan and I rode recently. We rode 7.8 miles, with an ascent of over 2600 feet. The horses did great, but it wasn’t an easy trail.

We arrived in Glen Haven around 8:20 AM. We passed the first two trailheads on our way to Glen Haven. The parking lots were full. It was a Sunday, which makes it even harder to get a parking spot. The Garden Gate trailhead has significantly more parking available than the Rainbow trailhead. If you arrived early, there would be room for a horse trailer at Garden Gate. Not so at Rainbow. Additionally, Rainbow is shorter but even steeper. No thanks, not on horses.

The trailhead in Glen Haven isn’t terribly well marked. It is accessed off of a private road. Internet information will tell you it is “behind the stables in Glen Haven.” There are no stables in Glen Haven anymore. The only parking available is a gravel strip on the opposite side of the road as the trailhead. The road is fairly busy, but there was room to tack up the horses on the far side of the trailer. There were over a dozen cars parked there, in addition to our truck and trailer.

In spite of the number of cars that were there when we arrived, we didn’t encounter many hikers. The trail is definitely rocky. Kadeen does a great job of choosing where to place his feet. Sadie is less accustomed to this terrain. On flat, dirt trails, she strides out significantly. On this trail, she was less discerning than we would have preferred. When Kadeen set the pace, she slowed down. However, she’s a close tailgater. If we let her go in front, she blasted down the trail!

There were several areas where they had to traverse solid rock. I do worry about shoes slipping on solid rock. Often, I ask our farrier for bohrium nails. They add just a little bit of grab on the rocks. I used that approach when I lived here 6 years ago.

The horses enjoyed a bit of a breather in the middle of the ride. We rode through an absolutely beautiful meadow. Apparently, at one point there was a logging mill there. We saw evidence of a water collection system for cattle, but we didn’t see any cattle.

Summitpost.org has some wonderful information about the Crosier Mountain trails. A gentleman named Kiefer apparently penned the write-up. His words were descriptive enough that I thought I’d share them verbatim:

Despite the dryness and heat, all three trails are surprisingly delightful to hike, mountain bike or ride pack animals on (dogs are also allowed!). All three trails are of a moderate difficulty with Garden Gate being a borderline strenous but this (is) more due to its length. On the trail, you’ll encounter elk, whitetail, rabbit and the occasional porcupine or skunk. The usual barrage of squirrels and chipmunks as it winds through a landscape of Pine, Juniper, Bitterbrush, Yucca (Spanish bayonet) and Prickly Pear cactus can also be expected.

This is prime mountain lion habitat and black bear is frequently seen in the environs come spring into early summer as they forage and again in fall as they begin to put on weight. I have personally seen bear on two separate occasions in the hills just across the valley. Making loud noises will definitely ‘announce’ your presence to minimize any ‘surprises’. Also, keeping dogs leashed in cat and bear country…I think goes without saying. I’ve heard of Newfoundlands being attacked and killed by mountain lion, despite their size. So be aware while hiking or train-running.

We did not see much wildlife. We didn’t have the dogs along. However, we did pass several hikers with leashed dogs.

There is an uphill push at the end to the summit, but it is amazing when you get there. Estes Park was visible, as well as many of the adjacent mountains.

The horses enjoyed a grassy patch while we snacked on dried fruit and nuts. As hard as going up is on their lungs, going down is much harder on their legs. We took it slow, and as I mentioned before, they did great. Sadie flew into the trailer!

A bonus to riding from this location is the Glen Haven General Store cinnamon rolls! It was in this store that my neighbor posted her “Missing Horse” flyer. Everyone on Storm Mountain where we live encouraged us to snag some cinnamon rolls. They are very good! Too bad it was the horses that burned most of the calories on that trail!

We would do this ride again, but we have so many options around here that we rarely do the same one twice. Perhaps the next time we will arrive at Garden Gate very early and head to the summit that way.